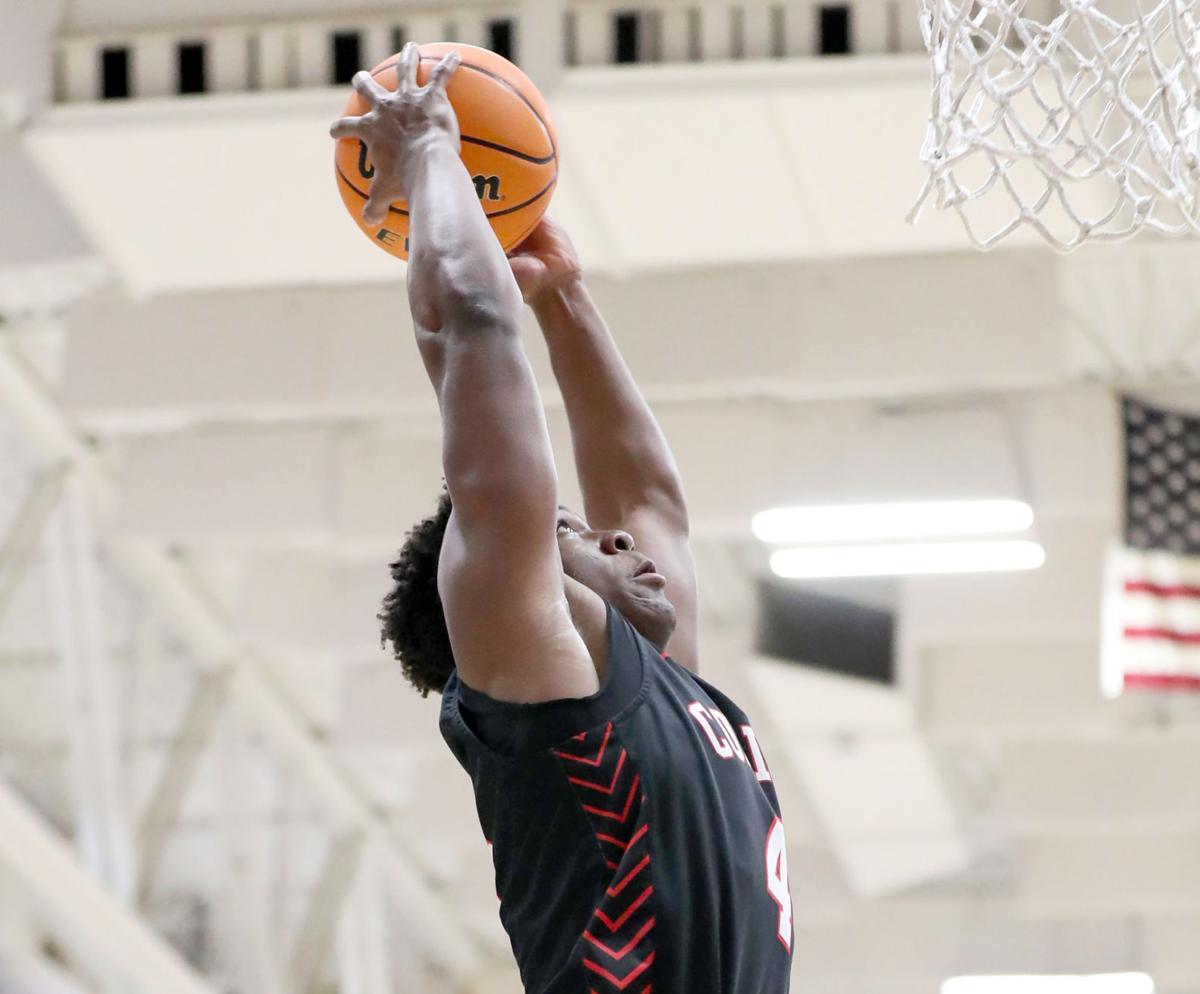 Corinth senior Cayden Betts sails in for the only dunk of the 2021 varsity boys championship game, won 53-49 by the Warriors. 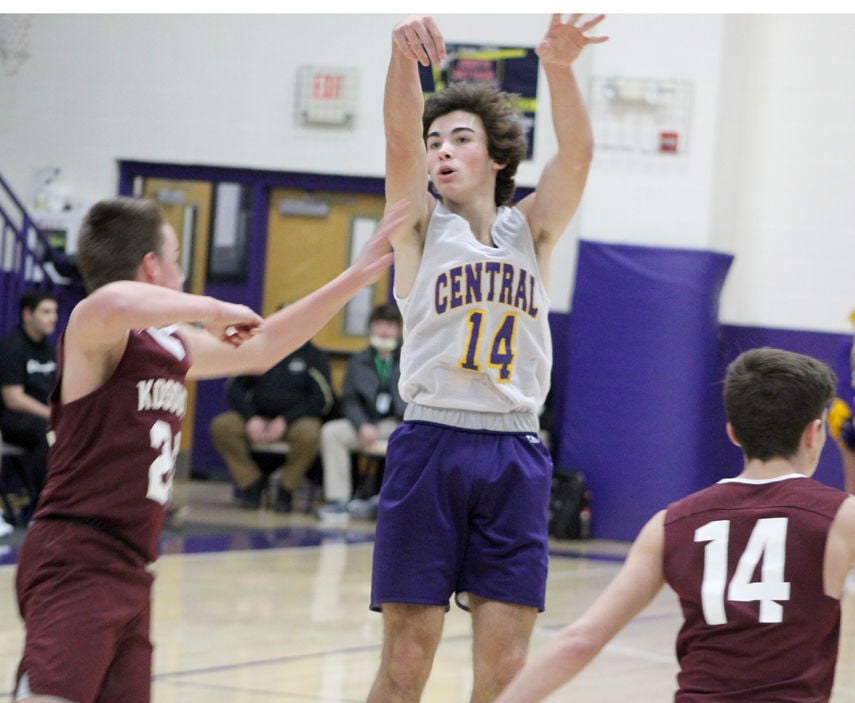 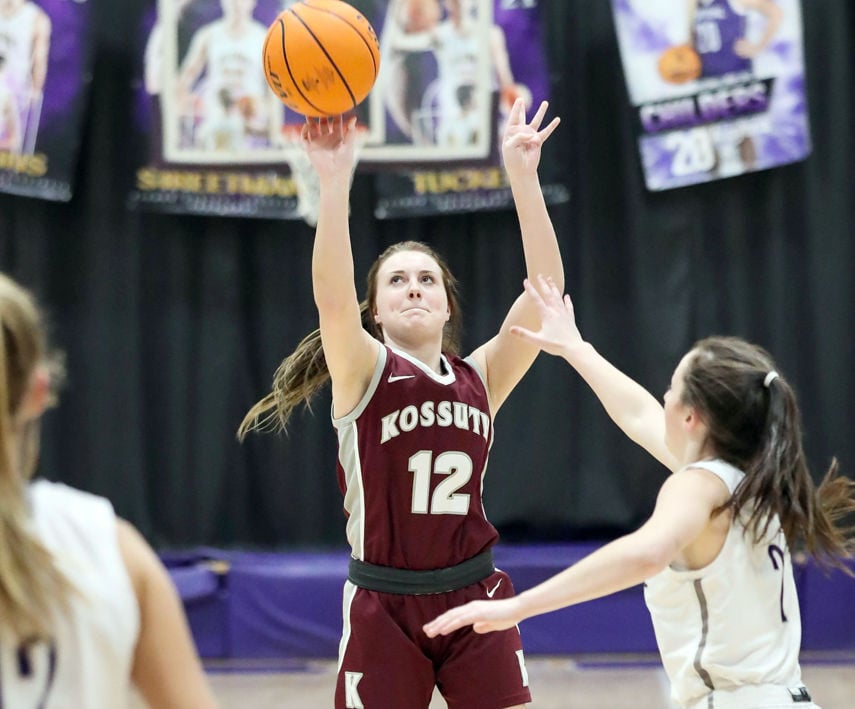 Corinth senior Cayden Betts sails in for the only dunk of the 2021 varsity boys championship game, won 53-49 by the Warriors.

GLEN – The 2021 Alcorn County Tournament is now in the history nooks. Following are summaries of each title game played Friday at Alcorn Central High School.

Both teams would continue their zone attacks into the second period, which gave way to some physical play in the paint. The rougher brand of ball led to numerous turnovers and fouls called for both teams. The Lady Aggies were able to find some offense from numerous spots on the roster, though, and took a 17-6 lead into the half.

Kossuth would come out of the half with intensity on the defensive end, jumping passing lanes, pressuring full court, and attempting to get out into transition early. Central would spark to life, however, behind some key shooting from Olivia Walker. The Lady Aggies led 22-13 heading into the final period.

The physicality would continue in the fourth, and so would the game trends. KHS was able to find some tough buckets to hold on to the lead, and Central could never quite claw back on the defensive end. The Lady Bears attempted a late press, and the Lady Aggies were able to slice and dice it up with some solid passing and took home the JV Girls county championship with a final of 26-18.

The next game of the night showcased the junior varsity boys teams of Kossuth and Alcorn Central. The first quarter began with some serious defensive energy, with both teams going scoreless in the first 3-and-a-half minutes of play. Bryson Jackson would hit a three to give Kossuth a 3-2 lead going into the 2nd.

During the second both teams kept up their defensive intensity. However, Both the Aggies and the Bears managed to jump out in some passing lanes and get some easy buckets and foul calls, which gave each offense some breath. The score was knotted at 12-12 at the end of the first half.

At the beginning of the third, both teams continued to trade buckets. However, mid-way through the third quarter freshman guard Rylan Henry would get to the line and lead an offensive burst for the Aggies. This gave them a second wind on the defensive end, leading to a 24-19 lead heading into the final period.

The game had all the earmarks of a close one throughout, and the fourth quarter was no exception. Kossuth started off in a lull on the defensive end, allowing Central to get back into the game with some clutch shooting.

The Aggies found themselves in the bonus halfway through the quarter, but would go on to miss the front end of two one-and-ones. From that moment on, the Golden Bears never looked back. They took the momentum and ran with it, making sure to finish their shots at the line late in the contest. The junior varsity Golden Bears would be crowned ACT champions for the second consecutive year.

Katelyn Bumpas connected on her first five three-point attempts, Kossuth’s defense did what it normally does – force numerous turnovers and convert them into points- and the Lady Aggies closed the game on an 18-0 run to pull away for a 62-37 win over Alcorn Central Friday in the Alcorn County Tournament varsity girls championship game. It was the fifth consecutive ACT title for KHS and the overall in the history of the event.

With junior ball wizard Zoe Essary making amazing behind-the-back passes for assists and scoring 13 herself, head coach Angie Malone was all smiles once again as her squad hoisted the championship trophy following the victory.

“The start that Katelyn (Bumpas) got off to was huge,” said Malone. “Then when they (Central) went on their run in the third quarter I called a timeout and told the girls ‘teams that play for championships find a way to shut down the other teams runs and then go on one of their own. I thought our entire team played with passion and purpose and we’re very happy to win another county championship.”

Bumpas drilled two straight three’s to begin before AC’s Jessica Hughes responded with one of her own to slice the lead to 6-3. Then back came Bumpas and Essary with back-to-back three’s to stake the Lady Aggies to a 14-4 lead with 4:23 remaining in the first period.

Kossuth continued to dominate the opening period as they led 24-6 heading into the second.

The Lady Bears didn’t roll over and say “’take the trophy it’s yours” though as they somehow slowed the potent KHS oofense to draw within 13 (33-20) at intermission.

The contest evened out in the third as Central managed to take another point off the lead, trailing 44-32 entering the final period. They scored the final five points of the third, along with the first six of the fourth, to deflate a once 18-point Kossuth lead to seven at 44-37.

“I was really proud of how our girls responded coming out of that break after Central cut the lead to seven,” said Malone. “Give credit to them (AC) though because they fought back and made a game of it as they normally do. These kinds of games are what county rivalries are all about.”

Bailey Holt was the third Lady Aggie in double figures, finishing with 14. Hughes connected on three 3-pointers and led the Lady Bears with 17. Sadie Perriman added 11 for Central.

Following a heroic 32-point outing in Thursday’s semifinal win over Corinth Ella Mask was held to a single free throw in the title game.

Essary and Bonds were both named to the All-Tournament Team along with Ella Mask and Hughes. Corinth’s Zakiah Gwyn and Biggersville’s Goldee Butler.

When Biggersville and Corinth play the two squads always seem to bring out the best in each other.

Two years ago in the Alcorn County Tournament the Warriors led by double digits a majority of the contest before the Lions stormed back to win by seven.

Then last year Biggersville won a nip-and-tuck affair on a last second put-back by by Zyonn Mayes at the final buzzer.

The two teams matched up again Friday in the 2021 ACT championship game with Corinth bolting out of the gates with a handful of three-pointers, including two by senior guard Will Crawford, the second giving CHS a 24-10 advantage.

Corinth then opened the second half on a 7-0 run to grab their largest lead at 35-15 before Biggersville began their journey to battle back into the game.

When Zae Davis scored to cut the Warriors lead to three {51-48) with just under 10 seconds remaining the Lions still found themselves in striking distance of a massive come-from-behind win and a third straight ACT title. Cayden Betts then misfired on the front-end of a one-and-one on the other end before Cam Smith nailed a free throw for Biggersville to cut the lead to 51-49 with 4.6 seconds left.

Betts then redeemed himself by sinking two free throws and the Warriors held on for a 53-49 victory.

“I knew I had two hit those two free throws there at the end to seal it for us,” said senior Cayden Betts who finished with 10 points. “I didn’t want to let my teammates down. Biggersville played a heck of a game and got back in it but in the end we were able to pull it out.”

“I’m really proud for our team, especially all these seniors to bring the county championship back to Corinth,” said Windom.”They (Lions) won on our floor last year and we’ve been waiting a year for this.”

Devin Leatherwood kicked off Biggersville’s fast and furious finish with a 3-pointer to make it 35-18 Warriors before Brooks Brand hit a short jumper to cut the CHS lead to 35-20.

“I told our guys following the game that I was proud of their effort whether we won or lost, they left everything on the court,” said BHS coach Cliff Little.

Brand nailed a couple of three-pointers within the Lions 27-16 fourth quarter run while Smith fought inside for a couple of tough buckets.

In the end Corinth won the game and the 2021 Alcorn County varsity boys title, their 45th.

“We got off to a fast start and then kind of got a bit lazy and took our foot off the pedal while making some mental errors and that allowed them (Biggersville) to get back in it,” said Greene. “But we picked the defensive pressure back up late and I was really proud of Cayden for hitting those last two free throws to win it after he had missed on seconds earlier.”

Smith scored a game high 19 for the Lions and was joined in double figures by Brooks Brand with 10. Corinth improves to 8-3 while Biggersville falls to 9-2.

The 2021 ACT Varsity Boys All-Tournament Team consisted of Windom and Crawford from Corinth, Smith and Brand from Biggersville, Braxton Ross from Kossuth and Jacob Tucker from Alcorn Central.

When it is widely available, will you get a coronavirus vaccine?