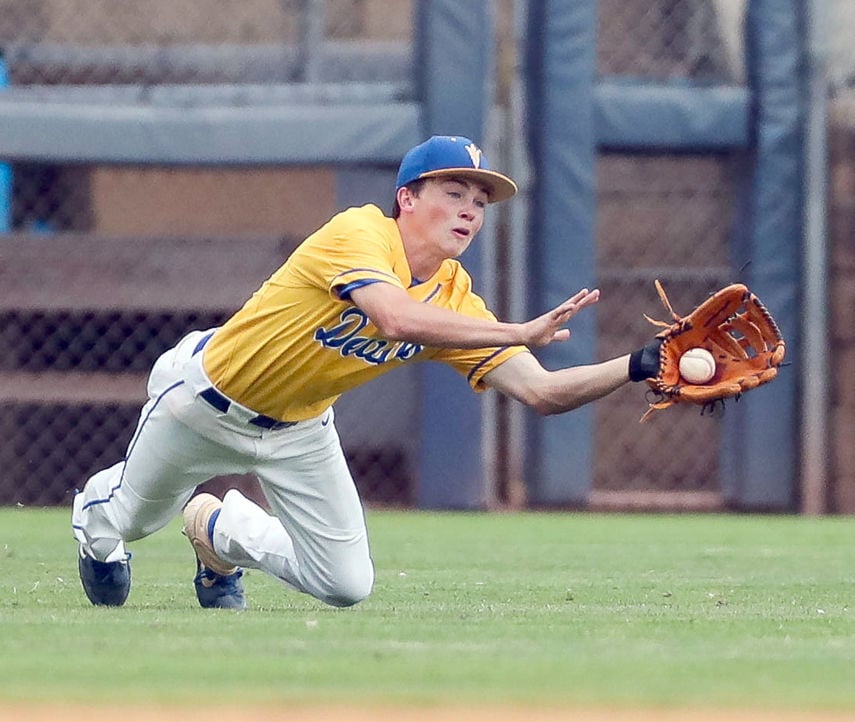 Booneville left fielder Carson Nash makes a diving catch during Tuesday’s 3A tilt between the Blue Devils and Magee.

Booneville left fielder Carson Nash makes a diving catch during Tuesday’s 3A tilt between the Blue Devils and Magee.

PEARL — Something had to give when Booneville met Magee in the opening game of the best-of-three MHSAA Class 3A championship series Tuesday at Trustmark Park.

For starters, both teams came into the series red-hot, winning a combined 19 games in a row (10 for BHS and nine for MHS) and 29 of their last 31. Neither had dropped a playoff game, sweeping their way through the postseason.

With solid starting, as well as relief, pitching – and defenses that were fielding at a high rate at just the right time – it seemed to the simple layperson, whoever hit the ball better and made the fewest mistakes would come out on the winning side of the final score.

So what happened on Tuesday?

The Trojans made a five-run first inning stand up as they held off the Blue Devils 6-3 in what turned into a pitching duel from the fourth inning on.

The most telling stat was in the “left on base” category as Booneville stranded a total of seven for the game, including two (at second and third) in the fifth as Coach Kevin Williams’ squad fought tooth and nail trying to get runners across the plate and runs on the scoreboard.

Magee knocked the cover off the ball as they began the contest with five runs on six hits in the top of the first off Blue Devil ace Hayden Donahue, who settled and locked in after the first allowing just one additional run before being lifted after five.

The Trojans recorded three singles, two doubles and a triple to grab the early lead and relied on their senior ace hurler, Adam May, to maintain control the remainder of the game, despite allowing three runs on five hits.

Mays’ final pitch count was 112, casting some doubt on his availability for a possible game three on Saturday.

Auburn football signee Cayden Bridges did the most damage in the first, ripping a two-RBI double down the line to the left-field wall, turning a 3-0 lead into a 5-0 advantage.

“I thought after that first inning Hayden did a great job of refocusing, locking in and relaxing and what we saw from then on was the pitcher we have seen most of this season,” said Williams. “Our offense gave us opportunities to score but we couldn’t come up with enough timely hits.”

Kyle Church led off the bottom of the first after being hit by a pitch but May struck out Ben Sandlin and Jackson McCoy sandwiched around a fly-out to right field by Ben Davis to end the threat.

Brennon McNair drove in the sixth and final Magee run in the top of the second on a fielders choice. With runners on second and third, he bounced a grounder to Church at shortstop who went to third for the force out, allowing Chandler Pittman to score from third.

The Blue Devils bats awoke in the bottom of the second as John Daniel Deaton led off with a walk, followed by two outs when Bryce Lindsey flew out in the infield and Gage Harrelson went down on strikes. During Harrelson’s at-bat, Deaton stole second and came around to score on an RBI double by John Adam White. White then scored on an RBI single by Donahue.

Church flew out to the right-center field to end the inning, but the Blue Devils trimmed the Trojans lead to 6-2.

Donahue allowed a line-drive double in the top of the third but struck out the remaining three Magee batters to keep the score at 6-2.

Lindsey recorded an RBI single to left field in the bottom of the third, driving in McCoy to make it 6-3.

The Trojans robbed Booneville of at least one run in the fourth when centerfielder Chandler Pittman made a spectacular over-the-shoulder catch, and inning-ending third out, on a well-struck ball by Sandlin with Donahue on second base.

“That was a case of his (Chandler) athleticism and speed being able to chase that ball down and haul it in,” said Williams. “Ben put a little bit too much air under that one or it falls in for at least one run.”

The bottom of the fifth also appeared promising for BHS as they had two runners on with just one out before Lindsey popped out to second and Gage Harrelson went down on strikes.

“Leaving runners on second and third there hurt us just as much as what happened in the fourth,” Williams said. “But after the third, it really turned into a pitcher’s duel and some really good defense by both teams.”

Sophomore Kade White relieved Donahue on the mound in the top of the sixth and was effective as he kept zeros on the board for the Trojans, allowing just one hit while striking out two over the final two frames with his off-speed breaking balls.

“We just felt like (Magee) were not hitting the off-speed pitches as well as the fastball and Kade has been effective with that the entire year for us,” said Williams.

Booneville had one final opportunity to extend the game in the bottom of the seventh but May forced the Blue Devils into a pair of fly-outs to right field and a ground out to third to end the game.

“Thankfully, this is a best of three series so we’re not done by any stretch of the imagination,” Williams added. “We’ll be back Thursday with the goal of winning and forcing game three on Saturday.”

Magee ended the contest with six runs on 11 hits and an error while Booneville registered three runs on five hits with an error.

Williams said he would make a decision on who will get the ball for game two before game time on Thursday.

The first pitch at Trustmark Park is set for 4 p.m. However, expected off-and-on rain the rest of the week could cause some adjustments in the MHSAA title series for all classifications.