You are the owner of this article.
Edit Article Add New Article
You have permission to edit this article.
Edit
Home
News
Sports
Prep Scores
Business
Obituaries
Opinion
Classifieds
Banner Independent
Share This
1 of 5 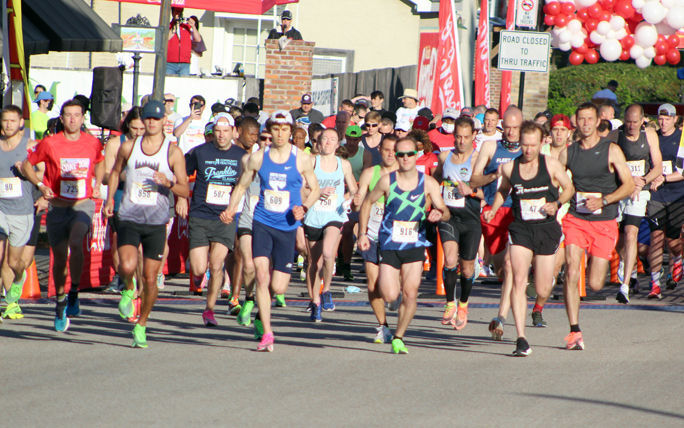 Runners break out of the starting corral Saturday to begin the 40th annual running of the Coke 10K. Nearly 800 participants finished the live, in-person race while another 200-300 ran the race virtually. 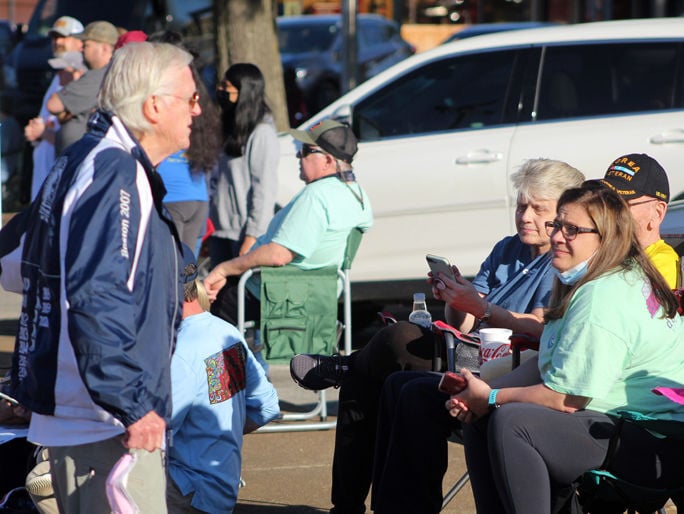 Corinth Coca Cola President / CEO Kenneth Williams (left) talks to race fans prior to the start of Saturday’s running of the 2021 Coke 10K. 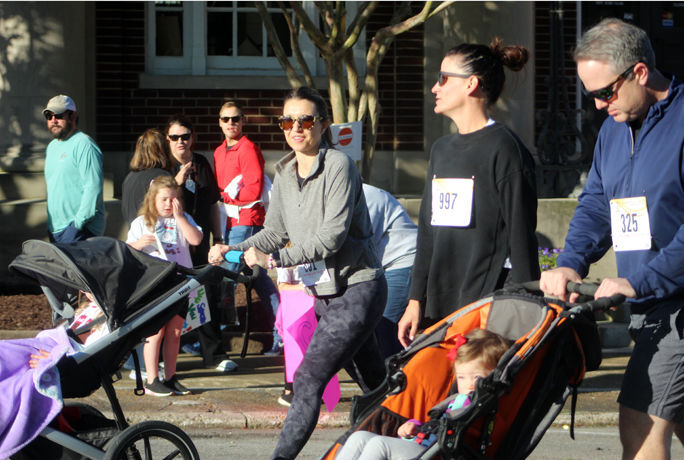 A group of parent runners push their infants on Foote Street before making the turn on Filmore during Saturday’s 40th Annual Coke 10K. 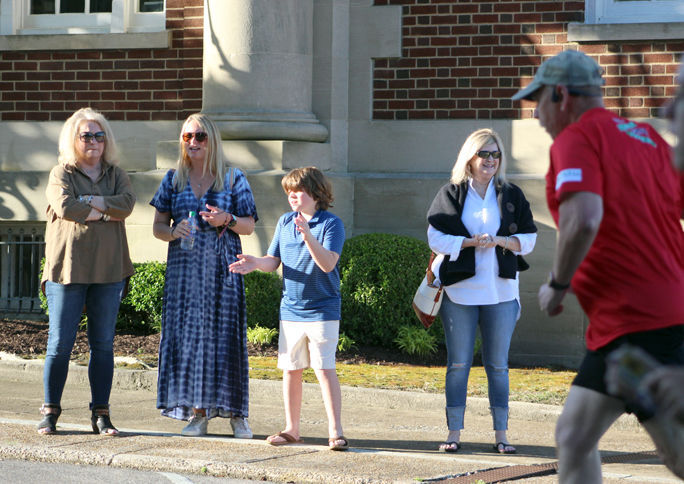 A young race fan cheers on runners near the start of the Coke 10K on Saturday. 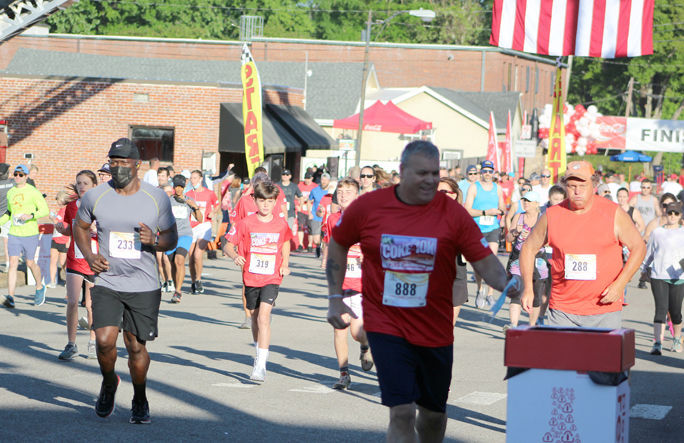 A runner disposes of his mask just after beginning Saturday’s Coke 10K in downtown Corinth. The race featured a starting corral this year and runners were timed with chips because of the 30-minute rolling start times from 7:30 to 8 a.m.

Runners break out of the starting corral Saturday to begin the 40th annual running of the Coke 10K. Nearly 800 participants finished the live, in-person race while another 200-300 ran the race virtually.

Corinth Coca Cola President / CEO Kenneth Williams (left) talks to race fans prior to the start of Saturday’s running of the 2021 Coke 10K.

A group of parent runners push their infants on Foote Street before making the turn on Filmore during Saturday’s 40th Annual Coke 10K.

A young race fan cheers on runners near the start of the Coke 10K on Saturday.

A runner disposes of his mask just after beginning Saturday’s Coke 10K in downtown Corinth. The race featured a starting corral this year and runners were timed with chips because of the 30-minute rolling start times from 7:30 to 8 a.m.

After more than a year of anticipation, runners and supporters were treated to a picture-perfect day for the return of the Coke 10K on Saturday.

“It was an awesome day,” said race director Mona Lisa Grady as the final few trophies and medals were being distributed. “We couldn’t have asked for anything better as the race returned to normal.”

It wasn’t 100 percent normal but it was as close as it’s been since the COVID-19 pandemic struck just more than a year ago, shutting down the in-person Coke 10K for 2020 and forcing a virtual-only race.

This year’s return to a live race also contained a couple of other minor changes that were firsts in the history of one of Mississippi’s largest footraces.

Grady and her staff created a starting corral that was well-designed with five lanes spaced four feet apart. The capacity for the corral was 250. As the corral thinned out after the starting horn other runners, most of which had been warming up in the green area adjacent to the starting area, entered the corral to begin the race.

“It was called a rolling start,” said Grady. “We had nothing but compliments from the runners about it and it couldn’t have worked out better. I can see the corral being used again in the foreseeable future.”

Runners were timed with chips this year due to the rolling start. For instance, the first male and female runners to cross the finish line were not the overall winners.

There were no live bands this year and winners were not announced over a P.A. system as in years past but those two elements Grady said she hopes will return next spring for the 41st Annual Coke 10K.

Overall male winner Josh Whitehead of Madison, Ala. won the Coke 10K for the second time, his first victory in Corinth coming in his first trip here in 2012. His finish time Saturday was 33:04.

“My plan was to run with the lead pack, settle in and control my own pace,” he said. “And that’s pretty much how it worked out. It was a beautiful day to run with mild temperatures and a light breeze.”

Whitehead said he was lucky just to be in the race this year.

“I had a 4-wheeler accident last summer and I was in a back brace for over three months. It was an ordeal going through that and all the rehab. But God has blessed me with being back in good health where I could be here and run today,” he said.

Top overall female finisher Emma Love of Memphis crossed the finish line in 40:24. It was her first time running the Coke 10K.

“It was a really fun race and the course was beautiful,” said Love. “It’s an awesome course with lots of rolling hills, but it’s also well shaded. It’s been a great experience for me and I hope to return next year and hopefully make this an annual thing for me.”

Jeff Snyder, manager of the Mall at Barnes Crossing in Tupelo, is part of the Tupelo-based running group Frog Island Flyers. Three of the dozen members were in Corinth Saturday for the Coke 10K as it celebrated 40 years.

“I ran this race two years ago and then last year COVID hit so I wasn’t able to then,” said Snyder. “I’m really glad it’s back to a live race. We all enjoyed running the route again. It’s a beautiful, scenic course and it sets up well,” said the mall manager, who also runs triathlons and duathlons as well as 5Ks and 10Ks.

“I can’t wait until next year when hopefully things will get more near back to normal as more restrictions are lifted.”

The local family of father Jordan Quinn, along with wife Angel and son Brody, ran the race together and had nothing but praise for the way this year’s race was handled in some difficult times.

“(We) have run this race for the last several years and, although we’re still dealing with this pandemic, (the) race couldn’t have been better,” he said. “The only things missing were the live music and the calling out of the winners over the P.A. Other than that the weather was perfect and everything about the race was good.”

Tanner Childs was the top Alcorn County male finisher in this year’s Coke 10K. He has been running since he was 12.

“My basketball coach (Kossuth’s Scotty Shettles) came to the gym one day when I was in seventh grade and said ‘You’re going to run,’” he said. “I just said ‘OK’ and started running.

“I really liked it.”

The 2018 Kossuth High School graduate, and rising junior at Blue Mountain College, was the top male Alcorn County finisher in a time of 38:52, good enough for 18th of 784 runners.

It was Childs’ fifth Coke 10K and his first time to finish as the top male from Alcorn County.

“In high school, I was only able to run on the odd years because state meets were during the same week,” he said. “I didn’t want to put myself through running both.”

He runs as a part of the Blue Mountain cross country team, where he competes in the 8K race.

Childs, the son of Mackey and Karen Childs, is majoring in business at BMC and plans to study accounting at Ole Miss after graduation.

He does not compete in any other race.

“I do this one because it’s local, it’s close to home,” he said.

For the second straight year, Jeniffer Jefcoat finished with the best time in the overall Alcorn County female division. She has been running for 10 years.

“I didn’t start running until I moved to Corinth,” she said. “I realized the Coke 10K was a big deal and I wanted to be healthier.”

Jefcoat finished with a time of 49:25, 114th overall. The Missouri native has lived in the Crossroads for 11 years and works as the children’s minister at First Baptist Church. She started running with “The Lunatic Fringe” – a Corinth-based group founded by Kenneth Williams.

“It is great to have the support of the Corinth running community,” she said. “I have never heard of such a close-knit group as we have here.”

After running her first Coke 10K, Jefcoat ran a half marathon before running a marathon, then a 50K. She even ran a 100-mile race at Tunnel Hill in Vienna, Ill.

“I just wanted to see how far I could push my body,” she said.

Her next goal is to run the Boston Marathon.