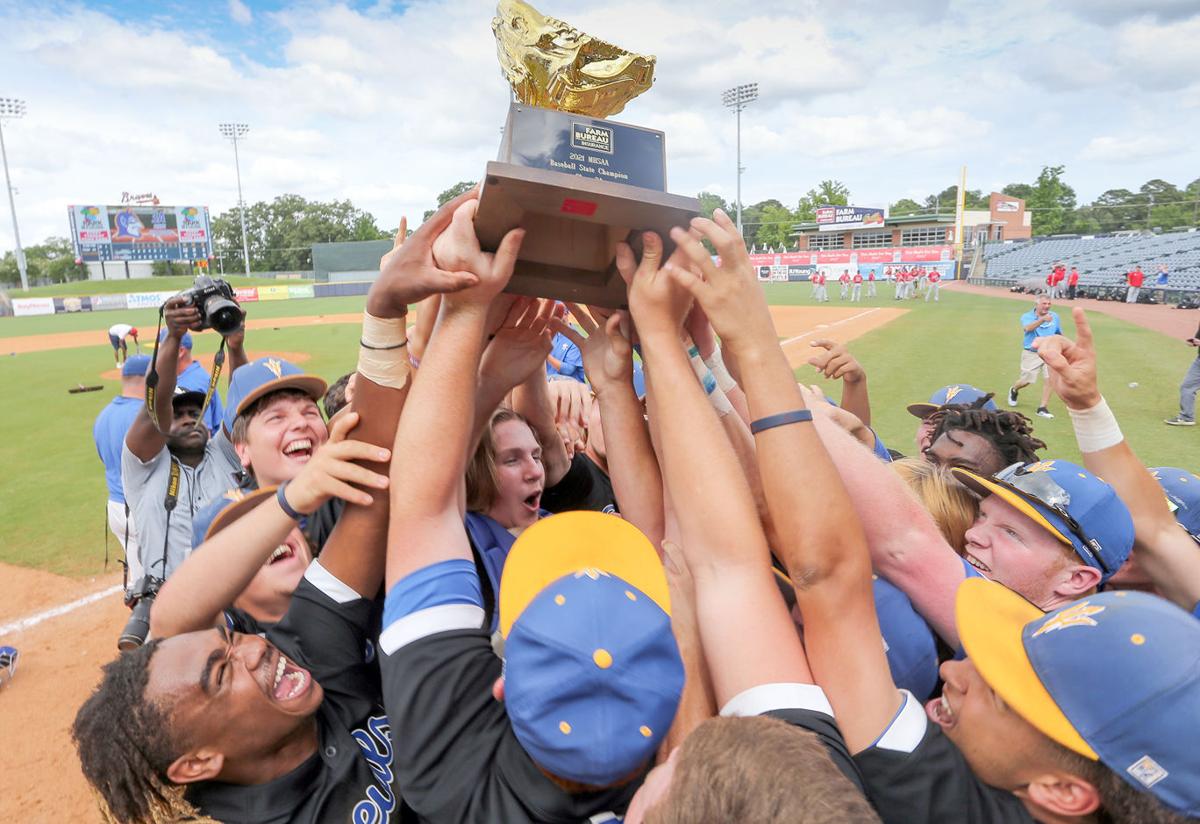 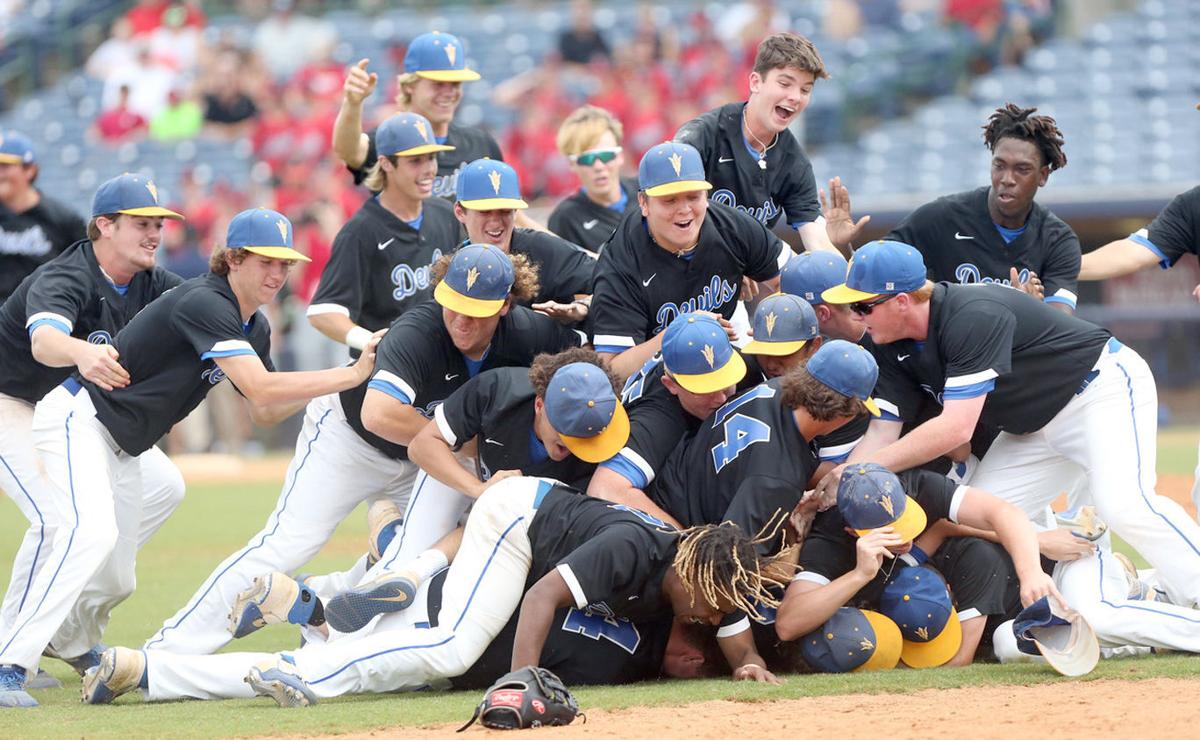 Blue Devil players create one of the longest standing traditions in sports, the traditional championship dog-pile, after defeating Magee 12-4 Saturday in Pearl to win the MHSAA Class 3A state title. 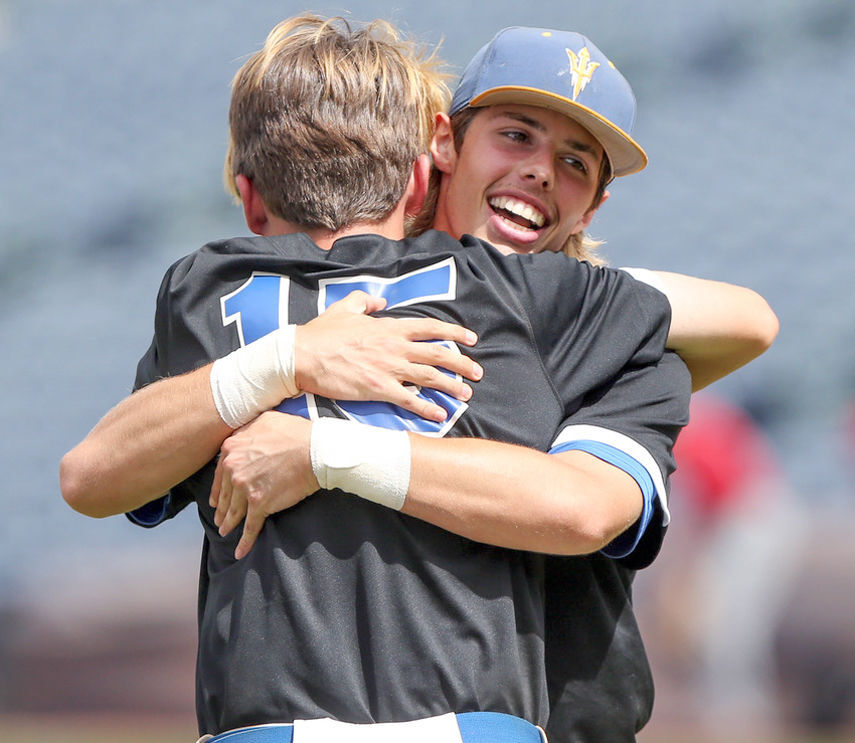 Blue Devil players create one of the longest standing traditions in sports, the traditional championship dog-pile, after defeating Magee 12-4 Saturday in Pearl to win the MHSAA Class 3A state title.

The first and, prior to this spring, only baseball state championship for BHS came in 1999 when the Blue Devils won it all in Class 2A.

“It’s a very big day for our community and everyone involved with the program,” said Head Coach Kevin Williams. “It’s a long season and we had some ups and downs as every team does, but our 12 seniors led the way and the entire team was focused on winning this title.”

For the second consecutive game, as Booneville rebounded from losing game one in the best-of-three series, the Devils jumped on top early. They led off the contest with an inside-the-park grand slam from senior John Daniel Deaton, which gave starting pitcher – junior Ben Davis – a cushion to work with as he took the mound for the bottom of the first.

In an ironic twist, the four first-inning runs came on just one hit. Senior Kyle Church drew a four-pitch walk to lead off followed by Ben Sandlin and Davis being hit by pitches that loaded the bases.

The Trojans responded with a single run in the bottom of the first as leadoff hitter Cayden Bridges, an Auburn football signee, reached on a walk, stole second and scored on a sacrifice fly moments later.

The Blue Devils, unlike game two, added more runs the following inning that they ultimately needed to win.

Senior John Adam White was walked on five pitches, then advanced to second as Magee starting pitcher Jourdan Magee threw one in the dirt that was ruled a passed ball. Donahue followed with a single to left – taking second on the relay throw – and Booneville was sitting nicely with runners on second and third and no out. Church was next, connecting on a sacrifice fly to get White home for a 5-1 lead. Davis followed that effort with a double down the left-field line to the wall, allowing Donahue to score from second, creating a 6-1 advantage for Williams’ club.

“Getting that early lead was very important to us,” said the sixth-year coach. “It allowed us to play more freely and allowed Ben a little more freedom on the mound.”

Booneville threatened to do more damage in the inning as senior Jackson McCoy reached on an infield single, advanced to second when he noticed there was no one covering the base, giving the Blue Devils runners at second and third with two out. Deaton was walked, loading the bases for Bryce Lindsey, but the senior grounded out too short, ending the charge.

Magee tried hard to answer the bell in the bottom of the second when, following a leadoff strikeout, they loaded the bases as the result of a pair of walks and an infield error. Facing the tall task of answering the bases loaded, one-out situation, Davis reached deep and fanned the next two Trojan batters, including Bridges looking at a called third strike.

Magee sliced into Booneville’s five-run lead in the bottom of the third when Brennon McNair clubbed a two-run shot over the left-field wall. It was 6-3 at that point but the Trojans wouldn’t score again until a single run in the home half of the seventh provided the final margin.

After MHS had cut their lead in half with one swing of the bat, the Devils answered with their second four-spot of the contest. Sandlin led off with a single to right, stole second, then moved to third when Davis grounded out too short for the first out of the frame. From there, McCoy walked as the result of a wild pitch that scored Sandlin from third, making it a 7-3 game. McCoy then stole second, as BHS was active on the basepaths the entire afternoon, followed by a walk being issued to Deaton. With runners on second and third following a double steal and just one away, Lindsey announced his presence with a two-RBI double that brought McCoy and Deaton home for a 9-3 lead.

It was then Booneville began to be able to taste the title.

Designated hitter Gage Harrellson tapped one back to the pitcher for out number two, While pitching to White, new Trojan pitcher Kaden Harper threw another wild pitch, allowing Lindsey to score for a 10-3 BHS advantage.

The Blue Devils added insurance runs in the sixth and seventh innings to secure the championship victory. McCoy crossed the plate in the sixth on a single to right by senior pinch hitter Eli Jones while senior pinch hitter Christian Price scored Booneville’s final run on an infield groundout after reaching on an error when the Magee shortstop mishandled a routine grounder.

Kade White made his second relief appearance in as many games for the Blue Devils. When the game’s final pitch, a line-out to Church at short, was thrown, all 27 Booneville players – along with team managers, created the traditional dog-pile to celebrate the historic win.

“Getting all those seniors in who don’t get to play a lot was special,” said Williams. “Ben gave a great effort, giving us four solid innings of work on the mound, and Kade was really good again in relief. Having that early momentum was a big thing and we felt confident in our pitching staff to get the job done.

The Blue Devils finish their 2021 championship season at 26-11 and a top-5 ranking in the final MHSAA polls. Magee ended with a 28-7 slate.