Skip to main content
You are the owner of this article.
Edit Article Add New Article
You have permission to edit this article.
Edit
Home
News
Sports
Prep Scores
Business
Obituaries
Opinion
Classifieds
Banner Independent
Share This
1 of 5 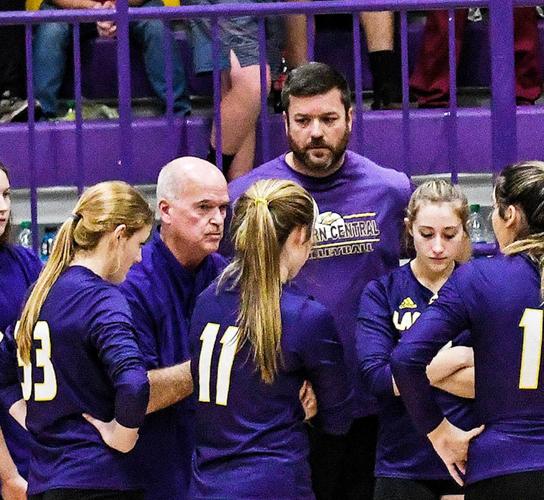 Alcorn Central head coach Eric Lancaster is the Daily Corinthian’s Coach of the Year for the second year in a row. 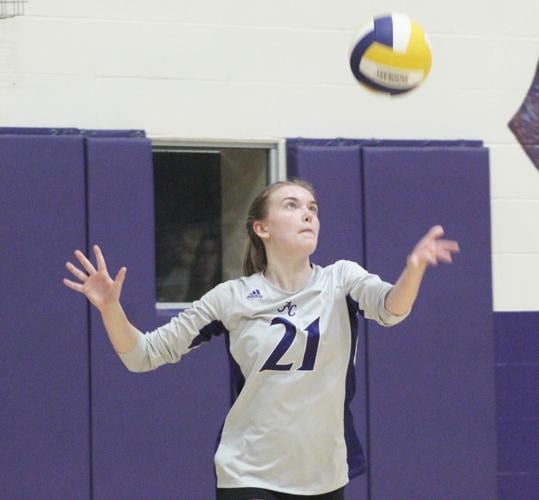 Alcorn Central’s Amelia Lancaster is the Daily Corinthian Player of the Year, totaling 919 assists, good for second in the state. 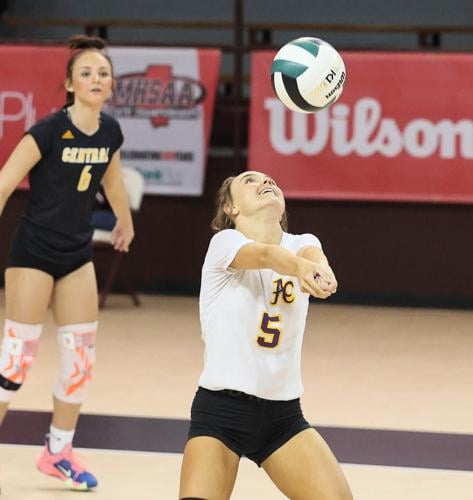 Alcorn Central’s Sydney Howie is the Defensive Player of the Year, anchoring the Lady Bears from her libero position. 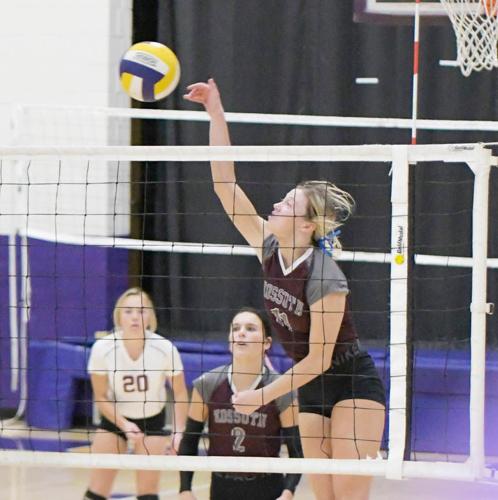 Kossuth’s Aven Mathis is the Co-Offensive Player of the Year, totaling 347 kills. 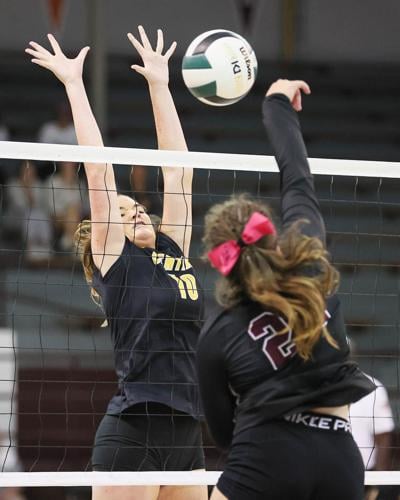 Alcorn Central’s Allie Kirkland is the Co-Offensive Player of the Year with her 351 kills and a state-best .470 hitting percentage.

Alcorn Central head coach Eric Lancaster is the Daily Corinthian’s Coach of the Year for the second year in a row.

Alcorn Central’s Amelia Lancaster is the Daily Corinthian Player of the Year, totaling 919 assists, good for second in the state.

Alcorn Central’s Sydney Howie is the Defensive Player of the Year, anchoring the Lady Bears from her libero position.

Kossuth’s Aven Mathis is the Co-Offensive Player of the Year, totaling 347 kills.

Alcorn Central’s Allie Kirkland is the Co-Offensive Player of the Year with her 351 kills and a state-best .470 hitting percentage.

In the past, I have never envied anyone who had to put together an all-area team, and after completing this one, I absolutely can relate to the challenge this project presented.

Even though I have only covered about two-thirds of a volleyball season here, this area has some of the state’s most talented players and teams. Choosing a player of the year was the biggest challenge as multiple girls were deserving, and I tried to do my homework with these selections for not just the individual awards, but the entire all-area team.

Numbers and stats, of course, came into play, and we had some players with some staggering ones. More than that, I tried to consult the people who know much better than me – the coaches, to evaluate not just their own players but more so the other ones in our area.

The fact that picking this was so difficult speaks to the high level of talent in the Crossroads area, and it’s only going to keep getting better.

Lancaster has been the anchor of the Lady Bears and one of the best setters in the state during her four-year career.

She has been voted Setter of the Year three straight years in her division, also getting Player of the Year for the division this season. She’s been a first-team all-division selection also for three years, with a second-team selection as a freshman.

“All the adjectives and cliches apply for her – leader, the quarterback, the point guard, the glue and the coach on the court for our team. She’s the player who makes everyone around her better and the hardest worker,” Central coach Eric Lancaster said. “Amelia gives 100 percent in everything she does, whether it’s practice or games. She is a complete player who ran our offense very well. Being the only setter in our 5-1 offense, she was involved in almost every play. She will be very hard to replace.”

Her 919 assists were good for second in the state and her 84 aces were also a team-high, and her 242 digs were second on the team. She had 60 kills from her setter position.

Lancaster, a Northeast signee, is also the Daily Corinthian’s Setter of the Year, an award she won last season as well.

The Lady Bears also won their seventh division championship under Lancaster and finished with a 26-10 record, putting his overall career record with Alcorn Central at 183-98 in nine seasons, including 163 wins in the last seven years. Lancaster was also the Daily Corinthian’s Coach of the Year in 2021.

These two juniors were forces at the net and both received high honors in their division.

Kirkland, a middle hitter, was voted the division’s Co-Defensive Player of the Year after setting a school record with 131 blocks, ranked fifth in the state. Her .470 hitting percentage was first as she had 351 kills. As a sophomore, she was also a first-team all-division selection and a first-team Daily Corinthian all-area selection.

“Allie is a dominant player on offense and defense, and she is a game changer for us,” Eric Lancaster said. “She was our go-to offensive threat and she could defend the net as well as anyone. Her mobility at the net improved so much this year, leading to her school record 131 blocks.”

Mathis has also been a first-team all-division and Daily Corinthian all-area first team the last two seasons, this year’s division Offensive Player of the Year. She was key in several areas, posting a team-high 347 kills and also added 82 aces and 127 digs.

“Aven is a dynamic player both in the front row and the back row,” Kossuth coach Dawnell Haupt said. “She consistently takes 40-plus swings a game and consistently points .400 each game. She is a leader on the court, setting the tone for player performance expectations, and she is a huge weapon on the court for the Lady Aggies.”

Howie, a four-year starter, reached 1,000 career digs at the beginning of her senior year.

“We have been extremely fortunate to have Sydney as our libero the last four years. That’s four years of knowing that your back row defense is in great hands,” Eric Lancaster said. “She’s always been our defensive leader, but she became more of a team leader the last two years. Sydney is a volleyball ‘junkie’ and always did the extra work to improve her game. She will always be remembered as the spark plug of our team.”

Moore led the Lady Braves to a third-round playoff appearance, posting 408 kills, 44 aces, 52 blocks and 115 digs. She was voted her division’s Hitter of the Year.

Seago was a first-team all-division selection as the Lady Lions reached the third round behind her team-high 257 kills and 34 blocks. She also had 121 digs, 48 aces and 39 assists.

Also a Northeast signee with her two teammates, Shipman was second in kills with 262 and aces with 66. She also added 209 digs, third on the team, and was also a first-team all-division selection.

Vuncannon, a Delta State basketball signee, led the Lady Wildcats to a North half appearance against eventual champ Belmont and was a force all over the court with 417 kills, 310 digs, 82 aces, 24 blocks and 22 assists. She earned Most Valuable Player honors for her division.

The one who set up all those kills for Vuncannon, Weeks finished with 745 assists and also added 173 digs, 49 aces and 30 kills. She was a first-team all-division selection.

Another do-it-all player and Northeast signee, Wilbanks filled up the stat sheet with a team-high 102 solo blocks, 83 aces and 160 digs, and finished second in kills with 289. She is a Northeast signee, first-team all-division selection and was last year’s Daily Corinthian Best Defensive Player.

Barnes came on in the playoffs and finished with 161 kills, six blocks, 174 digs and 59 aces, earning her second-team all-division honors.

Greene was voted the division’s Co-Defensive Player of the Year with 151 digs, 79 aces and 70 kills.

Addi Hicks (So.), outside hitter, Walnut

Voted the Offensive Player of the Year in her division, Hicks was a force with 230 kills, 124 digs, 26 aces and six blocks.

One of two setters for the Lady Aggies, Holley had 501 assists, 52 aces and 92 digs, earning first-team all-division honors.

Had 254 digs and 64 aces on her way to being the division’s Defensive Player of the Year.

Melissa Meador is a 2003 graduate of Alcorn Central and a 2008 graduate of Mississippi State, majoring in journalism and public relations. She was hired as the Sports Editor for the Corinthian in 2022.