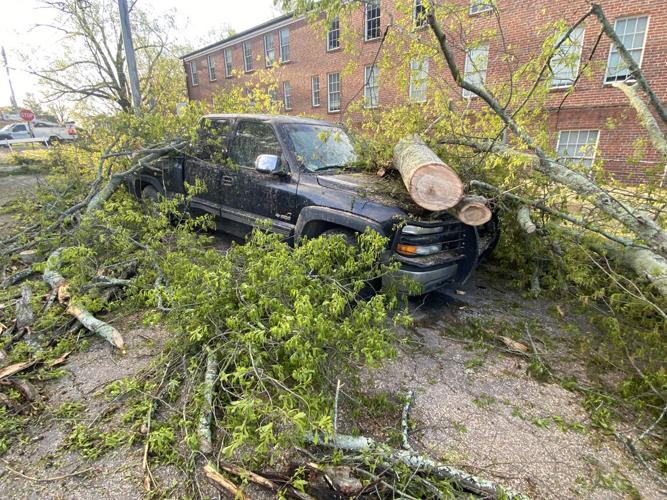 Many vehicles were damaged by uprooted trees, such as this pickup truck parked on Second Street behind First Baptist Church. 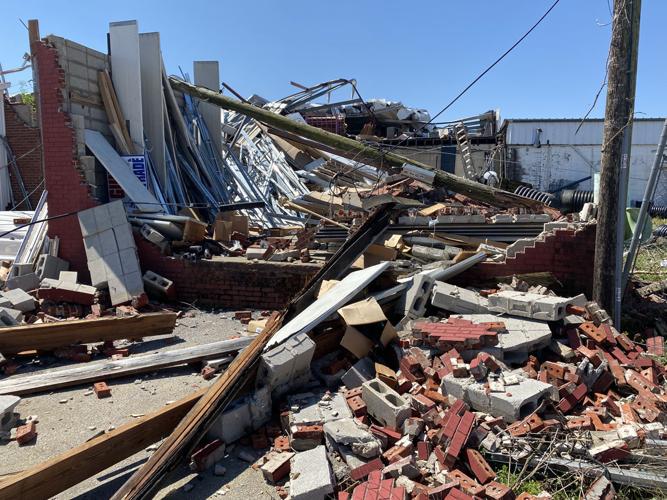 Corinth Overhead Door & Glass was destroyed by the Wednesday evening storm with a roof ripped away and collapsed walls.

Many vehicles were damaged by uprooted trees, such as this pickup truck parked on Second Street behind First Baptist Church.

Corinth Overhead Door & Glass was destroyed by the Wednesday evening storm with a roof ripped away and collapsed walls.

Loss of power closed Corinth schools and the Mississippi Highway Patrol was called in to help direct traffic with U.S. 72 as traffic lights were either damaged or without power.

At least one business was destroyed, Corinth Overhead Door & Glass on U.S. 72, when its roof was ripped away and rear walls collapsed. Corinth Color Center next door also had damaged. Tate Baptist Church also had roof damage.

Uprooted trees throughout downtown Corinth and the north Corinth area came crashing down on houses, vehicles and power lines or blocked streets. Shiloh Road was one of streets blocked for a period as city workers, police, firemen and voluneers came out to help clear debris Wednesday night and into early Thursday morning.

There was one report of a homeowner trapped inside a house and another report of a natural gas leak. Both issues were resolved quickly with no major injuries.

The National Weather Service warned the powerful storm would produce straight lines up to 80 m.p.h. There was no tornado and no tornado warning was issued for Alcorn County, although the storm system did produce tornado warnings in other areas.

Chainsaws could be heard all over Corinth Thursday morning as people cleared property of downed trees.

The Daily Corinthian interviewed Corinth Police Chief Ralph Dance about 8 p.m. Wednesday and he described the mayhem as "overwhelming."

Dance praised the efforts of all emergency workers for quick responses.

The Wednesday storm produce the worst damage to Corinth and Alcorn County since Hurricane Olga hit in October, 2019.

What are your summer vacation plans?