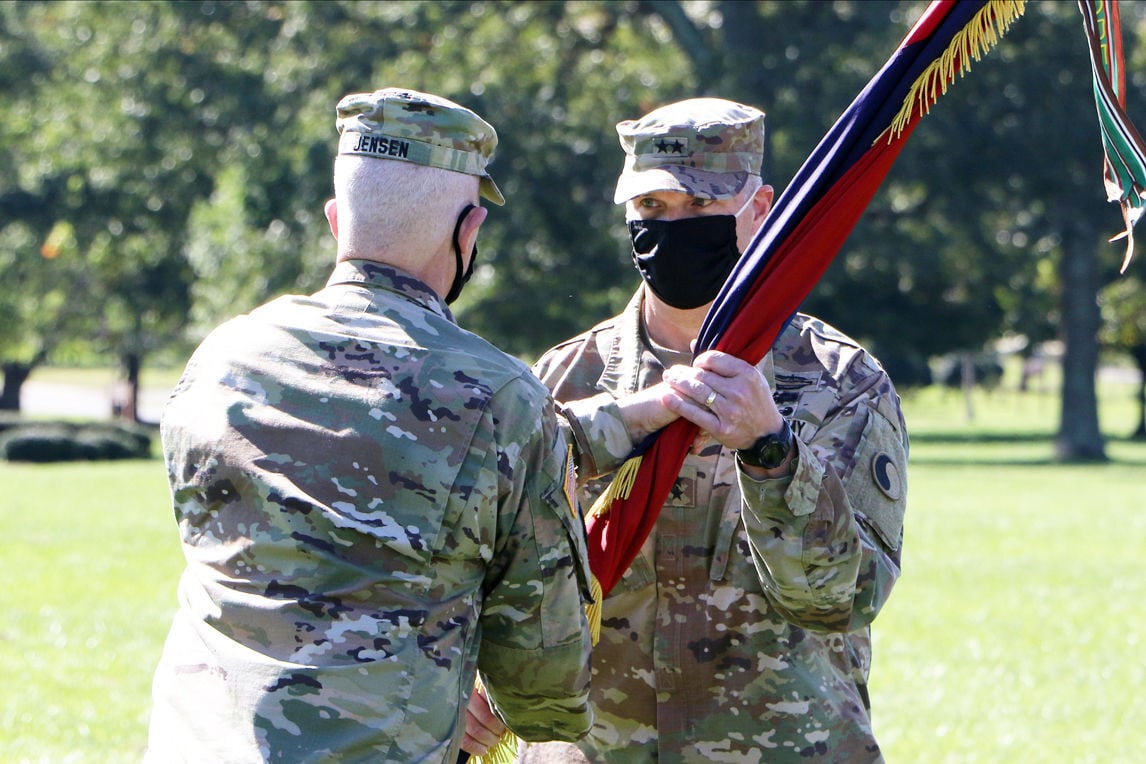 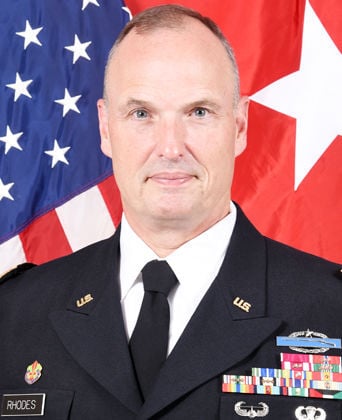 “For both Maj. Gen. Epperly and Maj. Gen. Rhodes, being a leader comes natural,” Jensen said. “Your ability to balance both your civilian and military roles serve as a testament to the concept of the citizen-soldier.”

Rhodes and his wife Debbie work and reside in Corinth, where he is the general manager of the City of Corinth Gas and Water Department.

“Maj. Gen. Epperly’s efforts and contributions have made the 29th a combat ready force, and my objective is to build on what he has established,” Rhodes said. “I thank the dedicated soldiers, NCOs and officers and families of the 29th Infantry Division and our line brigades, both past and present. The Blue and Gray patch we proudly wear on our left shoulder tells its own story. Everyone knows the history of this proud division, and you are carrying on the tradition of those who served before us, and your service to America and the National Guard speaks for itself. I look forward to our continued service together.”

Jensen recognized Epperly for his 31 years as a maneuver warfare leader with successful commands at the company, battalion, brigade and division level including two combat deployments, and said his hard work, dedication, leadership, and mentorship will have a lasting effect on the 29th Infantry Division and the National Guard for years to come.

Jensen told Epperly he was leaving the division in very capable hands with Rhodes as the new commander.

“You have our complete trust and confidence as you assume command of the 29th Infantry Division,” Jensen said to Rhodes. “I know your operational and deployment experiences will serve you well as you take this division forward.”

He also thanked all the soldiers of the 29th on behalf of the chief of staff of the U. S. Army and the chief of the National Guard Bureau for the tremendous service and sacrifice and continued support for the Army National Guard, the division and the entire nation.

Jensen presented Epperly with the Distinguished Service Medal to recognize his outstanding tour of duty as the 29th ID commander.

“In the past 30 months, the division has been involved in three corps and division level Warfighter exercises,” Epperly said. “Both our infantry brigade combat teams have completed XCTC (eXportable Combat Training Capability) rotations and trained for JRTC (Joint Readiness Training Center) rotations, and our armored brigade combat team is completing a deployment in support of Operation Spartan Shield. In a ‘Back to the Future’ moment, the 111th Field Artillery provided the division a capability thought to be lost to the sands of time: the ability to provide fire support from amphibious craft in littoral operations.”

The list of achievements goes on and on, he said.

“Over the last four years, the 29th Infantry Division has served as the vanguard of the National Guard’s eight combat divisions that represent 44 percent of the U.S. Army’s total combat power,” Epperly said. “The Blue and Gray Division was the first National Guard division to lead Operation Spartan Shield in the Arabian Gulf Region as a counterweight to malign Iranian influences in the Gulf.”

Epperly said perhaps the most significant accomplishment of the division has been the reorganization to prosecute large-scale ground combat operations against a peer adversary.

Reforming the division by re-aligning the brigades was no easy task, but today it impacts everything from how we select our leaders to how we train, equip and fight. By creating a fun division of cohesive brigades, we have created a far more lethal and survivable unit for the modern battlefield.”

Epperly credited the support of Gen. Daniel R. Hokanson, Chief of the National Guard Bureau, when he was the director of the Army National Guard as well as the Adjutants General from the states contributing brigade formations to the division.

Rhodes served as the 29th’s deputy commander for operations for three years, and Epperly described him as “an inspirational leader of soldiers, an outstanding tactician, and true practitioner of maneuver warfare.”

He further described him as a seasoned combat leader with multiple combat tours, and said, “Having seen him in action, I am confident he will be a superb division commander, and I am proud to have served with him.”

Rhodes said the opportunity to serve as the 29th ID commander is both an honor and a privilege, and he recognized Epperly’s leadership and strategic vision set the conditions for success as the division prepares for upcoming missions.

Rhodes was commissioned a second lieutenant, Infantry in May 1987 through the Reserve Officers’ Training Corps at Mississippi State University. Currently he serves as the deputy commanding general of operations for the 29th Infantry Division. Prior to transferring to the Virginia Army National Guard in 2018, he served as Mississippi National Guard assistant adjutant general – Army and the commander of the 66th Troop Command. He also commanded a Joint Task Force in response to natural and manmade contingencies in support of homeland security and defense operations. From 2010-2013, he served as the commander of the 155th Armored Brigade Combat Team. His combat assignments include mortar platoon leader for the 6/6th Infantry Battalion, 1st Armored Division during Operation Desert Storm in 1991, commander of 1/155th Infantry Battalion during Operation Iraqi Freedom III in 2005, and deputy commander of 155th Armored Brigade Combat Team during Operation Iraqi Freedom 9.2 in 2009-2010.

Rhodes earned a Bachelor of Business Education from Mississippi State University in 1987, a Masters of Business Administration, Military Management from Touro University International in 2003 and Master of Strategic Studies from the United States Army War College in 2010.

Mississippi Gov. Tate Reeves ended a statewide mask mandate Sept. 30. Do you agree with his decision?