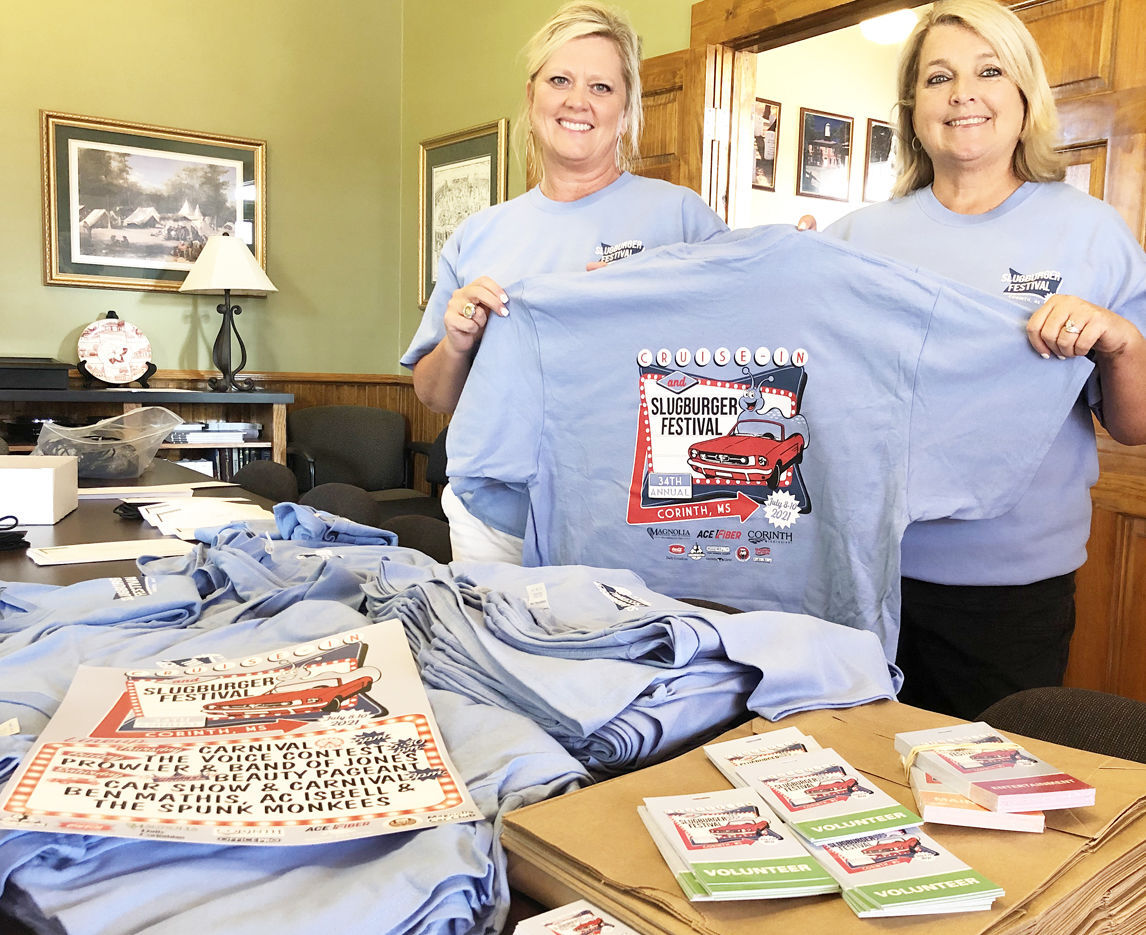 Visit Corinth Director Christy Burns and Main Street Corinth Director Angela Avent show off the t-shirt for the 2021 edition of the annual Slugburger Festival. The carnival opens Thursday night, with other activities slated to begin on Friday night and carry over throughout the day on Saturday. 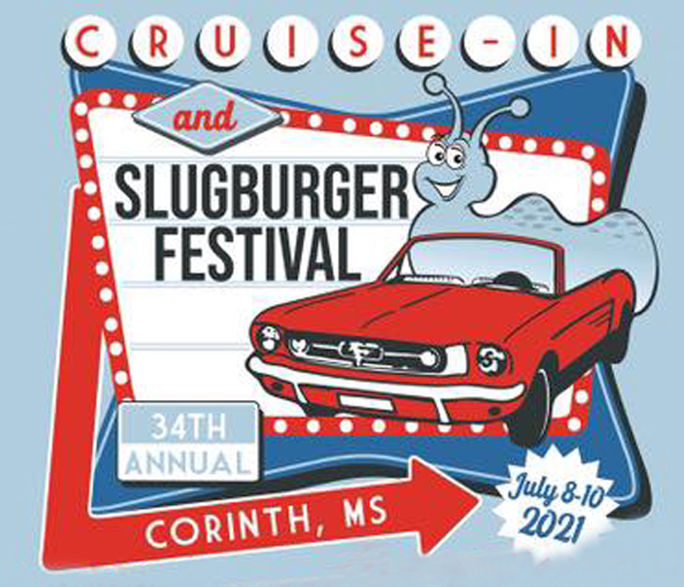 Visit Corinth Director Christy Burns and Main Street Corinth Director Angela Avent show off the t-shirt for the 2021 edition of the annual Slugburger Festival. The carnival opens Thursday night, with other activities slated to begin on Friday night and carry over throughout the day on Saturday.

The countdown is on for Cross City’s great summertime festival.

Following a dormant 2019, the Slugburger Festival is finally making its return to the historic city streets of downtown Corinth this week.

At the helm of the two-day event is Main Street Director Angela Avent who worked side-by-side with Visit Corinth Director Christy Burns on Tuesday preparing sponsor and volunteer packets.

“Feels good to be back,” said Avent. “Last year was not fun. Having to skip something I love so much.”

“A year without the Slugburger Festival is like a year without Christmas,” she said while the two organizers shared a chuckle and smile.

The festival kicks off on Thursday night with the Midway carnival in the clock parking lot. It will open Thursday and Friday at 5 p.m., and at noon on Saturday. Armbands for $20 allow for unlimited rides.

The entertainment portion of the festival won’t start until Friday night with Prowler and A Band of Jones. On Saturday, the lineup includes Ben Mathis, AC Isbell and The Spunk Monkees. The entertainment stage will be set up at the Corinth Depot and admission is $10. Saturday’s other activities include a classic car cruise-in, an amateur version of the Slugburger Eating Contest and the Miss Slugburger Festival pageant.

For some locals, collecting festival t-shirts and posters is almost as important as the festival itself.

“A good design makes for a good shirt,” said Avent. “And this year’s design is spot on.”

Pale blue with red and dark blue highlights, the shirt features the iconic cartoon slug this time riding in the backseat of a 1960s Mustang convertible.

The car is a nod to a first-time partnership that Avent is proud of.

“We are working with the Magnolia Classic Car Club for the first time ... more than 100 cars and trucks are expected to enter the festival cruise-in,” she said. “They will be lined up on both sides of the street around the courthouse on Saturday. It will be something we think will get folks excited.”

Those attending the cruise-in will also be able to purchase a festival shirt and a deep-fried slugburger at Borroum’s Drug Store on Saturday.

Slugburgers and t-shirts will also be available for purchase at both the carnival and entertainment area during open times.

Before the festival, shirts will be available at the Visit Corinth office, The Alliance and Borrum’s Drug Store.

The festival's singing competition, Slug Voice, has been canceled for Friday night due to unforseen circumstances.

Organizer Brett Garrett, who also sponsors the event through Garrett Eye Clinic, said the competition would return in 2022.