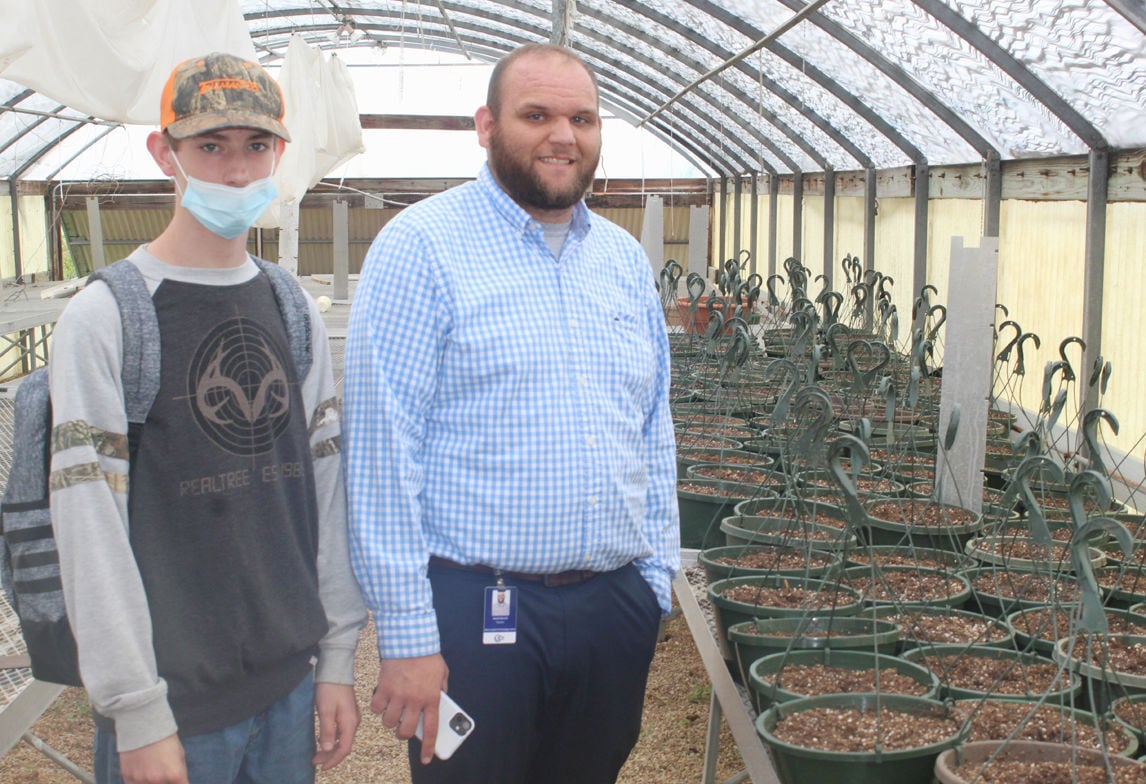 Daniel Derrick, along with one of his agriculture students at the Alcorn County Career and Technology Center, look over some plants in the greenhouse. The new teacher hopes funds from requested grants will help complete planned upgrades inside and outside the greenhouse. 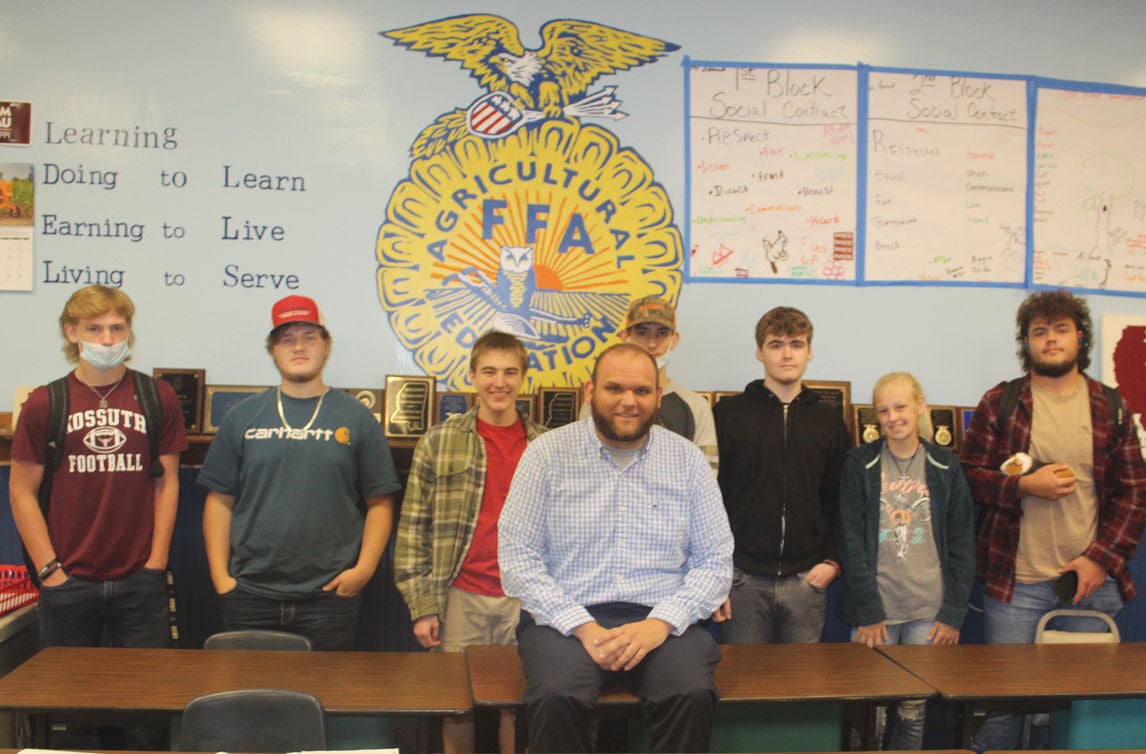 Daniel Derrick takes time with some of his ag students at the Alcorn County Career and Technology Center. A closer look shows the student on the far right holding one of the class projects, a furry, lovable hamster that the students are helping raise.

Daniel Derrick, along with one of his agriculture students at the Alcorn County Career and Technology Center, look over some plants in the greenhouse. The new teacher hopes funds from requested grants will help complete planned upgrades inside and outside the greenhouse.

Daniel Derrick takes time with some of his ag students at the Alcorn County Career and Technology Center. A closer look shows the student on the far right holding one of the class projects, a furry, lovable hamster that the students are helping raise.

Daniel Derrick is a bright young educator with a mind focused on the future.

And that future includes agriculture first and foremost, only behind God and family.

Derrick, a 2013 graduate of Alcorn Central High School, and a 2018 graduate of Mississippi State University with a degree in Agriculture Education began as a teacher and advisor at the Alcorn County Career and Technology Center last spring after serving two years teaching the same subject at McNairy Central High School.

His parents are Johnny and Laura Derrick and his brother, Jonathan, also graduated from Alcorn Central.

Derrick is full of ideas and aspirations when it comes to the future of all things agriculture. The first order of business since accepting his current position is to elevate the kids’ interest in the subject and show them, by example after example, just how rewarding agriculture can be.

“Agriculture is not all about farming and tractors and planting and harvesting,” said Derrick. “It goes far beyond that. It doesn’t matter what a person chooses to do for a living, chances are they will see aspects of agriculture in everything they do.”

The former Golden Bear, who played football during his prep career, said, “During the pandemic, a lot of things got put on the back-burner, and kids lost interest in a lot of things, including agriculture. And that’s understandable to a great degree because during that time they were pretty much confined to their homes and weren’t able to get outside and do things pertaining to agriculture.”

Then he added, “People may not believe this but a lot of kids, that are extremely intelligent in a lot of areas, didn’t know where chocolate milk came from. There was a survey done a few years ago where students were asked if they knew how chocolate milk was made.”

The answers were somewhat humorous, yet telling.

“Some said chocolate milk came from brown cows while others said it was Nestle’s Quick or some other form of powder mixture that mixes with milk,” added Derrick. “I want these young people to get enthralled with all areas of agriculture, from planting a bush or a tree – or even potted plants – and take care of them, culture them and watch them grow. Then when they see the end product they will have a much better understanding of how agriculture works.”

Derrick was the beneficiary of the knowledge and advice of former Alcorn County Vo-Tech teacher and advisor, the late David Nowell, who passed away last spring.

“Getting to know Mr. Nowell, and being able to see first hand the knowledge and intelligence he brought to the field, I already had some aggressive ideas for the future of the ag department here in Alcorn County .. but he placed a lot more in my mind that could and should be done for the future of these local students,” he said.

“A lot of what we’re doing here now is based on things that he (Nowell) started. For example, we have applied for a couple of major grants that, if we receive them, will help greatly in upgrading our facilities and equipment here at the Vo-Tech as well as bringing in live animals like chickens and sheep and even fish and wildlife. Not only that we plan on making needed improvements inside and outside our greenhouse. Mr. Nowell already had a solid foundation built for these purposes even before he passed away.”

One item in particular that Derrick plans on bringing in is new aquaponics and hydroponics tanks for fish.

“If we get these grants we will be able to finish the greenhouse upgrades and additions and even add outdoor areas for planting and so on,” said the ag teacher. “And the shop is more of a spring project, but still a part of our plans.”

To that point he added, “A big thing in the spring is the planting and growth process. Lectures and book learning are all good, but hands-on is always better.”

Derrick said the current students enrolled in agriculture seem to be warming up to all the new ideas Derrick has in mind and are excited to see what happens.

Especially if they are awarded the grants in which they applied.

“A lot of kids might like to try those fields and not even be farmers and that okay too. If we can expose them to every area of agriculture, even trade schools that may be a better idea for some due to how expensive college can be, it all works together towards the same goal.”