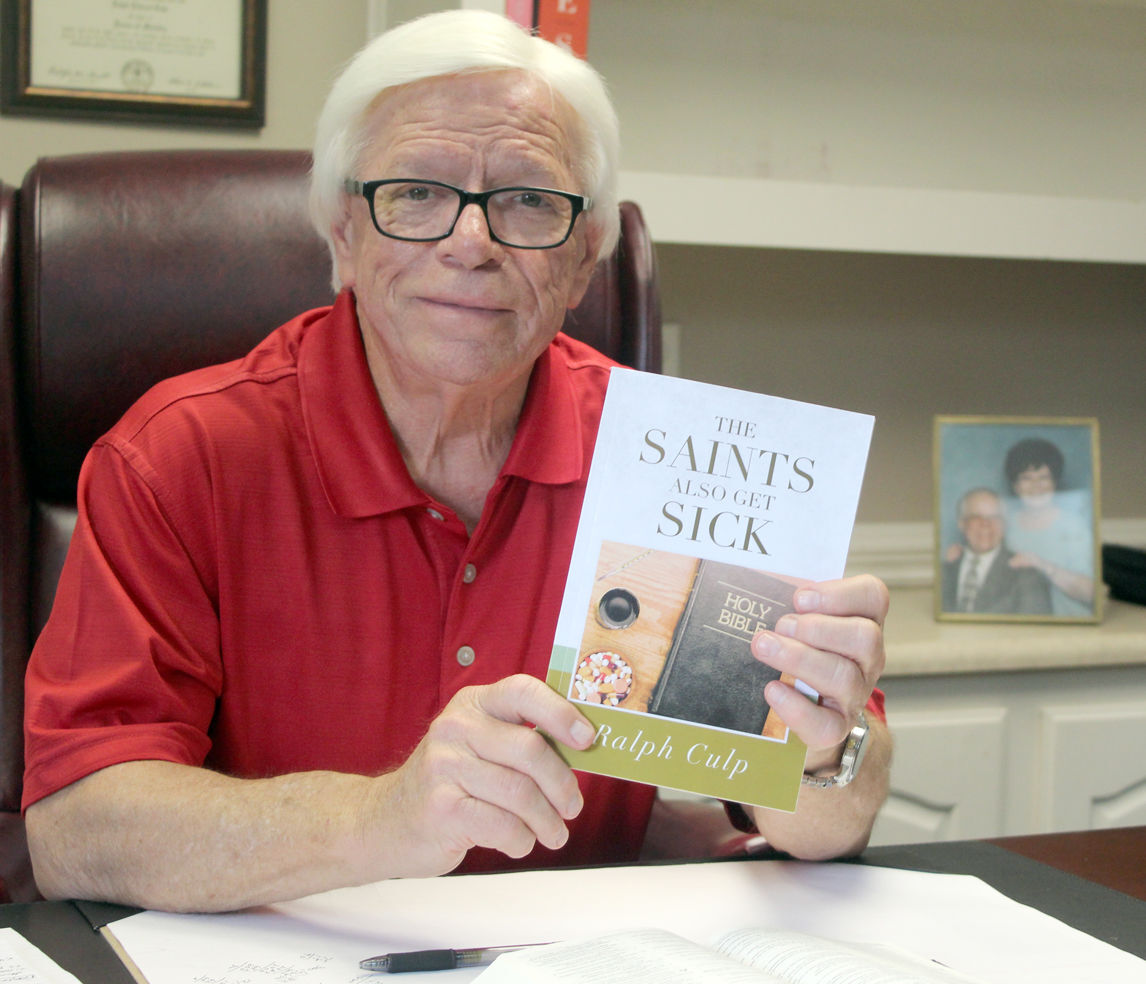 Ralph Culp displays his new book “The Saints Also Get Sick” as he sits at his desk in the Farmington Baptist Church office. He is flanked by a photo of he and his late wife Becky, who inspired the writing. 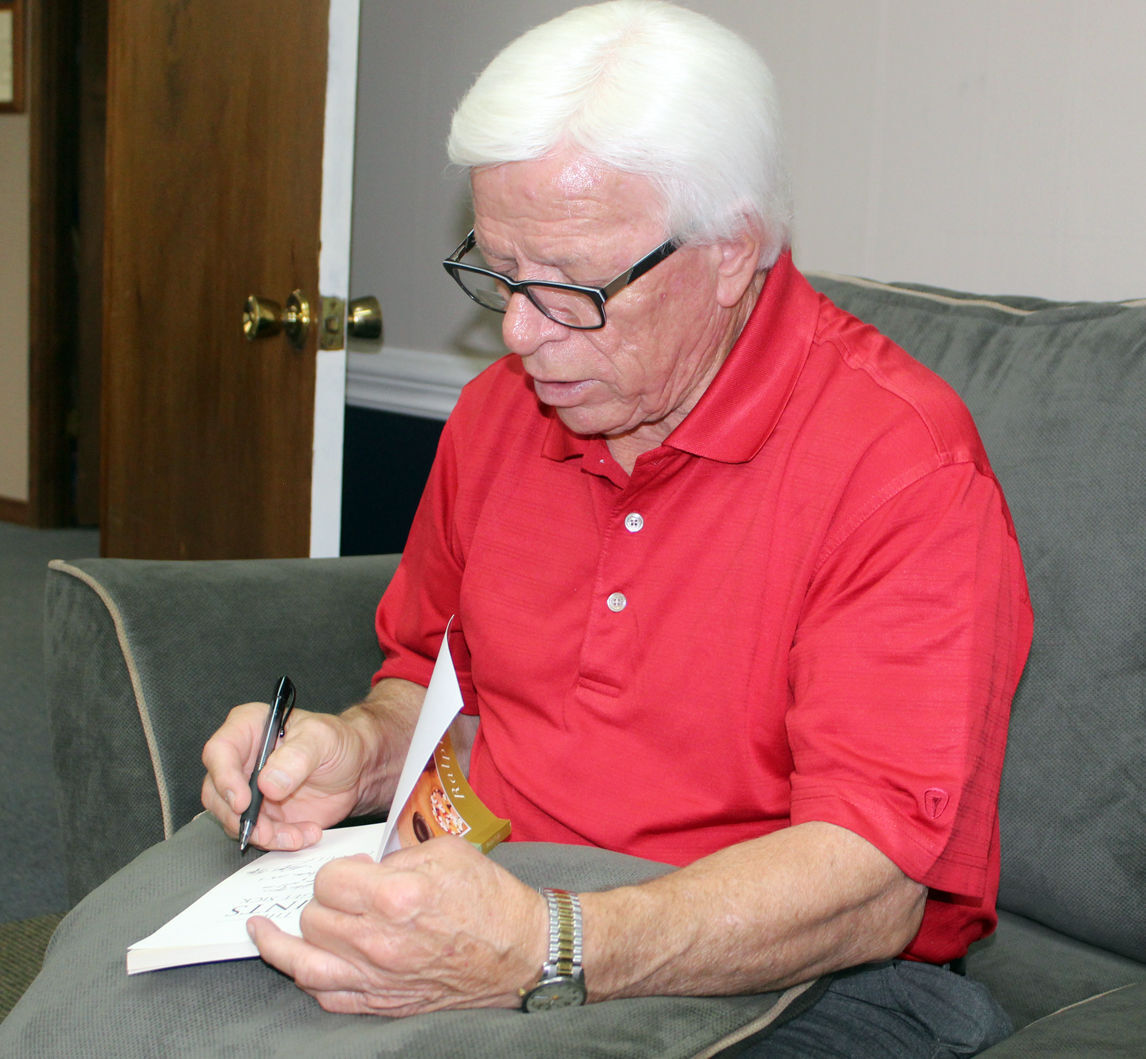 The author signs a copy of his new book while sitting in his office.

Ralph Culp displays his new book “The Saints Also Get Sick” as he sits at his desk in the Farmington Baptist Church office. He is flanked by a photo of he and his late wife Becky, who inspired the writing.

The author signs a copy of his new book while sitting in his office.

Isn’t it amazing how one, minuscule thought can turn into a powerful message that anyone should take to heart?

Such was the case with local minister Ralph Culp.

The Farmington Baptist Church pastor recently had his first book published, “The Saints Also Get Sick.” In his own words, “The title of the book, and the thought process that led to it, came from a statement my late wife made.”

Culp lost his beloved Becky in 2015, almost 15 years after she was diagnosed with cancer, a cancer that at one time, “had almost consumed her,” according to the author.

In the end, it wasn’t cancer that claimed her life, but complications from the chemo treatments she had received for 18 months.

“She died of congestive heart failure,” said Culp. “But the doctors believe it developed as a result of the chemo.”

The preacher’s journey to writing and having his first book published began when he was ordained as a high school student.

Culp vividly recalled the time he was called to preach.

“I was 14 when I surrendered my life to God and the ministry,” he recalled, “And I was ordained in 1963, during my junior year at Tishomingo High School.”

“In fact, I can remember thinking I wanted to preach as early as age 12. Daddy was a saw-miller and both my parents were Godly people who made sure our home had a Christian environment and that we went to church every time the doors were opened.”

The Farmington pastor met his late wife during their high school days, but weren’t exactly high school sweethearts .. but almost.

“Her family was from Tishomingo, but she lived in Memphis,” said Culp. “We would see each other as often as we could, especially in the summer when school was out. I would go visit her in Memphis or she would come spend time with me and my family in Tishomingo. But after we graduated, we went our separate ways and didn’t see each other for many years,” he continued.

Education was priority one

Upon his high school graduation, Culp attended Clark Memorial College in Newton, Miss. for two years, majoring in Bible and Psychology, before transferring to Blue Mountain College where he earned his bachelor’s degree in those fields. He later attended seminary in New Orleans as well as Memphis before completing his doctorate in Jacksonville, Florida.

Even though he had been ordained seven years earlier and was preaching in various churches during his higher education studies, Culp returned to the area in 1970 for his first full-time local work when he was hired at Calvary Baptist Church in Corinth.

“I actually finished my dissertation and earned my doctorate while I was at Calvary,” he said.

The pastor remained at Calvary for seven years before spending time at East Corinth Baptist, then Golden, Miss, and then back to East Corinth in 1998.

“I was so excited about being retired because I would be able to travel more and preach wherever I chose to,” said the preacher.

He was asked to fill in as interim pastor at Farmington last September with the understanding they would hire a new full time preacher.

“I’m still here, though, and I have grown to love it,” said the veteran church leader, who assumed the position full time in April.

The story of Ralph and Becky seemed to have ended around 1964. But as fate would have it, they were brought together again over 30 years later.

“We parted ways after I graduated from Tishomingo and she graduated in Memphis,” he reminisced. “But as strange as this may sound, fate – or something akin to it – brought us together again. And it wasn’t just any place … it was at church.”

Culp had been invited by a preacher friend to hold a revival at the friends congregation.

“The both of us were standing out on the front steps of the building, greeting people as they arrived,” he said. “A really nice Thunderbird cruised into the parking lot and I saw a couple of ladies exit the car. I didn’t recognize either one at first from a distance, but when they approached me, I could see one of them was a cousin I hadn’t seen in awhile.”

The cousin’s friend passed by Culp’s preaching acquaintance and surprised the author.

“The cousin’s friend walked right up to me, kissed me on the cheek, and smiled broadly before entering the sanctuary. She didn’t say a word and I still had no clue who she was,” said the visiting minister.

“But when I walked in and saw her sitting with the cousin, it hit me who she was. She already knew who I was.”

His future bride became a hairdresser and her appearance had changed since high school.

“She had long black hair and a perfect figure back then,” he recalled. “But now her hair was different and, like most of us, she had put on a little weight. But it looked good on her.”

“Both Becky and I had married other people after college and had our own families, but at this time we were both single again and fate took over,” said the author.

“Becky was the life of any party and kept everyone in stitches laughing and in a good mood,” he said. “She was the most Godly woman I believe I have ever known. She radiated the love of Jesus wherever she went.”

A couple of years after they married, following a brief engagement period, Becky was diagnosed with cancer.

“She started having some painful symptoms and decided to see her doctor, who then performed an entire battery of tests on her,” said the widower. “They (doctors) ordered 24 rounds of chemotherapy (once a month).

After the 18th treatment, and shortly before Thanksgiving, the late pastor’s wife was handed the most devastating news of all.

“During her visit that day, her doctor said he thought it best not to do that particular chemo treatment. He encouraged her to take a little time and enjoy the holidays before resuming the treatment schedule,” said Culp. “When we got back in the car, Becky looked at me and said, ‘He (doctor) didn’t give us a return appointment’. She insisted I go back in and check on it. When I did, the doctor told me he was glad I came back in because he wanted to speak to me one on one. That’s when he informed me that the cancer had pretty much consumed her and, in his professional opinion, further treatments were futile. He also told me that, at best, living another six months would be a tremendous blessing.”

The pastor returned to the car, dreading having to relay the news to his beloved wife.

“I just came out and told her,” he said. “As soon as I did, she immediately bowed her head and started praying. I could see her lips moving. When she finished her prayer, she looked at me with that beautiful, encouraging smile, patted me on the knee and said, ‘Well, let’s get home. We have shopping to do and meals to cook’. She was determined, even in what had to be her darkest moment, to hand it over to God and be happy in whatever days she might have left.”

“Similar to what I imagine Job went through in the Bible, she had friends and acquaintances that asked her if she ever questioned God about her sickness and simply cried out, ‘Why me Lord’. But she responded with the statement that inspired this book by questioning, ‘Why not me’?”

Surprise, the cancer is gone

After a few months with no treatments, the Culp’s returned to the doctor upon Becky’s request.

“We were talking one day and, out of the blue, she said, ‘I would really like to know what’s going on inside me’,” said the pastor. “She insisted that we call her doctor and have him rerun all the tests over again, so they did. In fact, they did them all twice more. But this time a miracle happened … the cancer had disappeared. Nothing showed up in any of the x-rays or tests. It was like the cancer was never there.”

Mrs. Culp proved the naysayers wrong by living until 2015, when she died of complications related to the chemo treatments she had received years earlier.

“Cancer didn’t kill her like we all thought it would,” said the pastor. “But she developed complicated side effects that ended up taking her life. It appears it was all caused by the chemo treatments she had endured.”

‘Even the saints get sick’

Upon his wife’s passing, the long-time preacher couldn’t stop thinking about the statement his late wife made about how to handle sickness, and allowing God to take it.

“I did extensive research in both the medical realm as well as what the Bible has to say about the subject and that led to the book,” said Culp.

“I encourage people to read the introduction and the conclusion first because, if that’s all they were to read of it, that’s where they will receive the main message of the writings within.”

His new book was published by Page Publishing in Pennsylvania and contains encouragement for anyone who has ever had to, or ever will, deal with similar circumstances.

“Becky was an encourager,” he said. “I wrote this book hoping to help others understand, both Biblically and from the medical side, that everyone gets sick, even the Saints. If it can happen to Becky, it can happen to anyone. My prayer is that people from all walks of life can find strength and comfort from reading the book.”

Chapters found in the writing include Sickness and Suffering, Hindrances and Handicaps and Surviving and Thriving.

Culp offered these final words on what he hopes readers will gain from the book.

“Two things,” he specified. “Remember that our faith in God and His word is powerful and that we may get sick in our body, but we don’t have to be sick in our souls.”

“The Saints Also Get Sick” is available on Amazon as well as selected bookstores. Culp will have a book signing and meet and greet at Tate Baptist Church on Saturday, June 26 where people can meet the author and get their own signed copy of his book.

The event will take place from 1-3 p.m. in the Tate Ministry Center Gym on Harper Road.