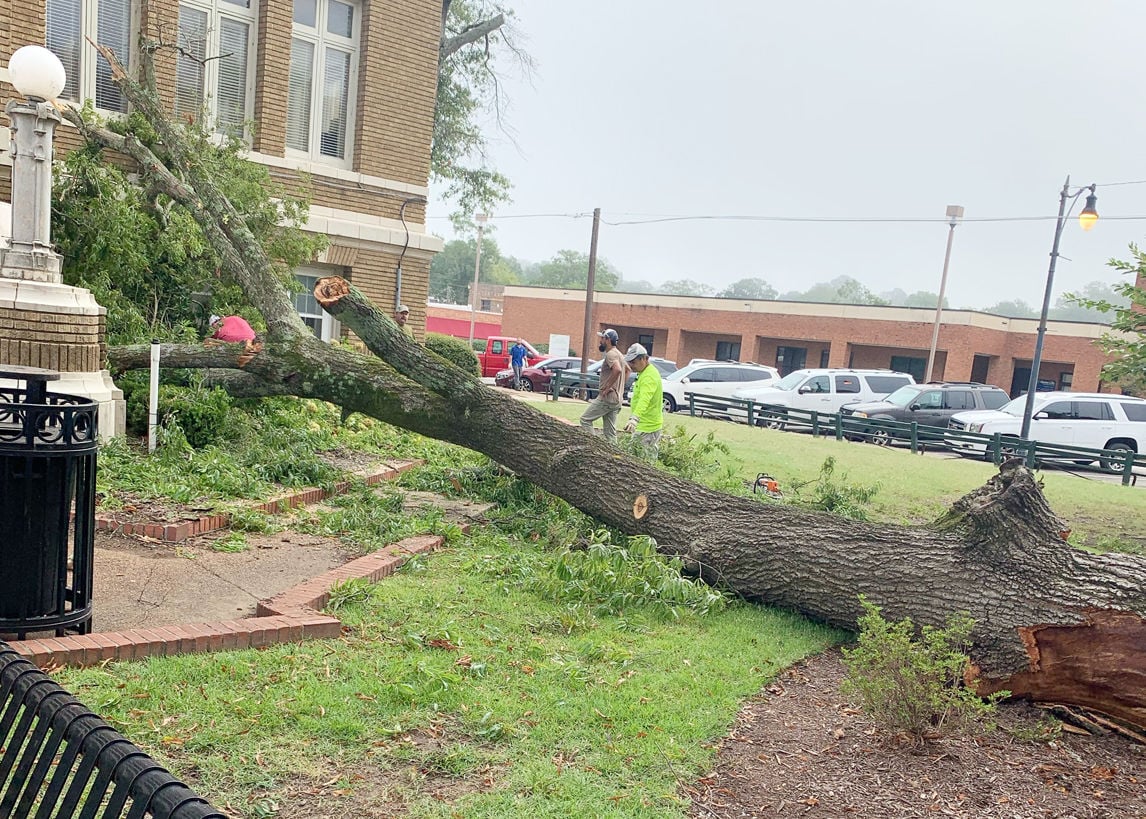 The collapse of a large limb in front of the Alcorn County Courthouse on Sept. 21 prompted concerns about safety around the old oak trees. 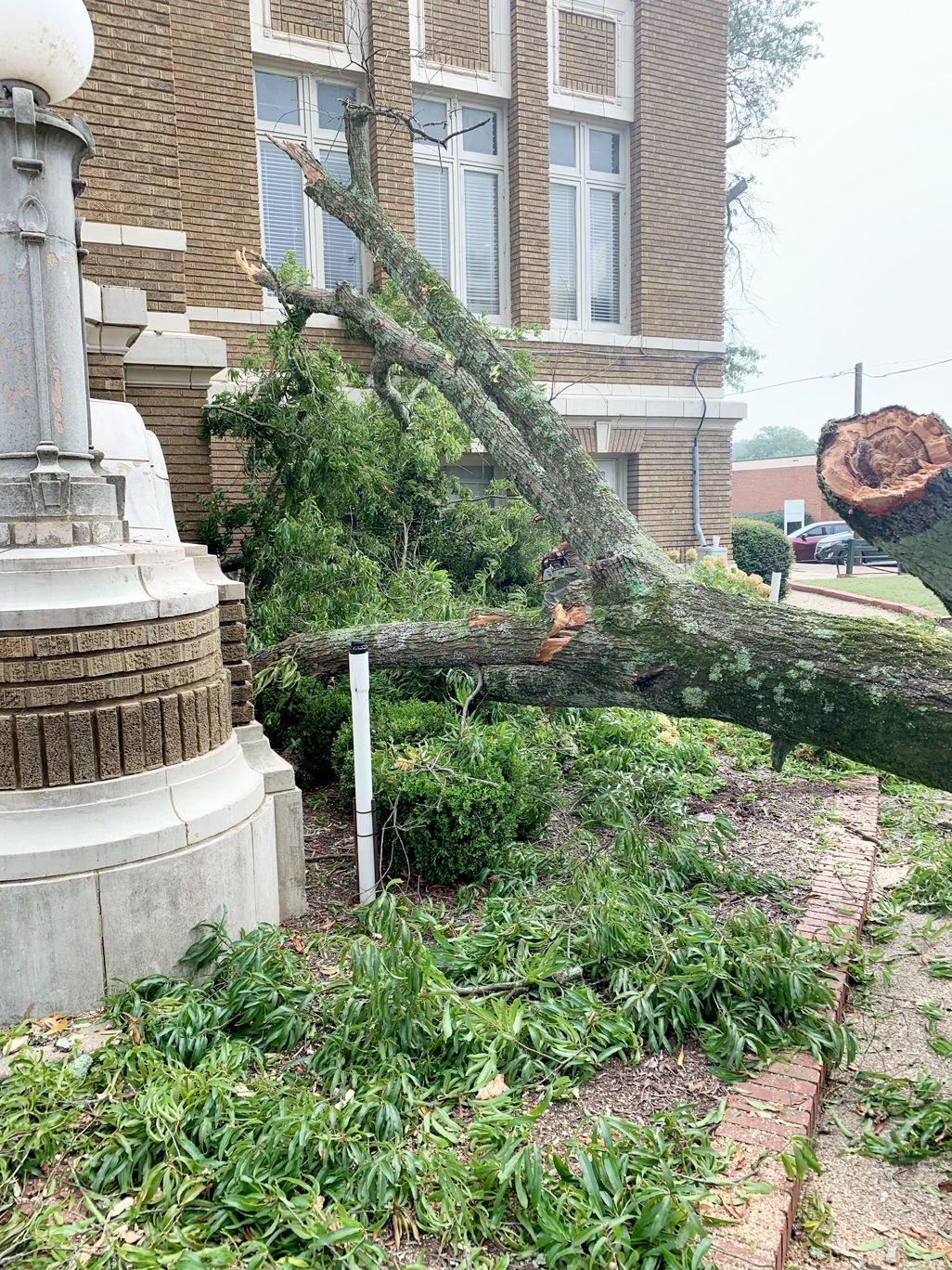 The county is getting quotes for the removal of two trees that pose a safety hazard on the courthouse grounds.

The collapse of a large limb in front of the Alcorn County Courthouse on Sept. 21 prompted concerns about safety around the old oak trees.

The county is getting quotes for the removal of two trees that pose a safety hazard on the courthouse grounds.

The days are numbered for some old court square dwellers.

Based on a certified arborist’s examination of the court square trees, the Alcorn County Board of Supervisors on Monday voted to get quotes for the removal of the two trees on the south and east sides of the building and for trimming on the others.

The large willow oak in front of the courthouse along Waldron Street lost a huge limb on Sept. 21, and the area has been roped off to keep people out of harm’s way. Its collapse across an area where people frequently gather on the grounds during events prompted concerns about safety.

“If somebody had been standing there when that limb fell, you’re talking about catastrophic results,” said Sheriff Ben Caldwell. “I hate to see that thing go, but you can look at it right now and see that there’s no canopy.”

The limb was covered in black ants, a sign of decomposing woody tissue.

The tree also lost a large branch in November 2019 and also in July 2015, when a metal bench was flattened.

According to the written report by Matt Nielson, consulting arborist with Green Groves, the oak is an estimated 100 to 130 years old with a diameter at breast height of 62 inches. Height is approximately 60 to 70 feet.

With the latest limb loss, the tree now has an imbalanced canopy, with most of the north and east side missing.

And another vulnerable limb is a big concern.

“We do have a limb that’s 30 inches in diameter, 25 feet or so in the air, that could fall at any time,” said Bobby Burns, purchase clerk.

Using a one-year risk assessment, the arborist rated the likelihood of the limb’s failure as “probable” and the trunk’s failure as “possible.” A wound with necrotic tissue was observed in the trunk, but “there is significant response growth around the callus,” Nielson found.

The courthouse, benches, cars, people and the buildings on the south side of Waldron Street are all potential targets if the tree falls.

If only that limb is removed, it will further imbalance the canopy.

“The only way to eliminate risk is to completely remove the tree,” the arborist concluded.

Immediate removal is the recommendation for the water oak on the east side between the courthouse and Regions Bank. It is 31 inches in diameter and approximately 30 to 35 feet tall.

The arborist found extensive dead wood in the canopy with some branches 6 inches in diameter and larger at 20 to 30 feet above grade. The tree has signs of hypoxylon canker, a fungal disease that causes the decline of the tree.

It likely has a significant hollow section on the south side of the trunk, the arborist reported.

The other large willow oak on the west side of the courthouse, with a diameter of 61 inches, was possibly planted at the same time as the one on the south side.

Nielson recommends cleaning up the wound from a previous branch failure with a proper pruning cut and to consider the removal of a limb on the south side that likely contains decayed wood tissue.

On the north side of the courthouse, a willow oak of 34-inch diameter has a dead limb extending over the sidewalk, and immediate removal is recommended. The tree has bark ooze on the south side of the trunk, and the tree likely has a hollow section 13 inches wide and 33 inches long on the trunk. Some root decay was observed, as well.

For the trees that will remain, the arborist recommends another assessment in one year and improvements in tree health through vertical mulching or an air injection process to aid in root growth.

The county expects to replace the trees that will come down, but what kind and when that will be done is yet to be determined.

“If somebody had been standing there when that limb fell, you’re talking about catastrophic results. I hate to see that thing go, but you can look at it right now and see that there’s no canopy.”