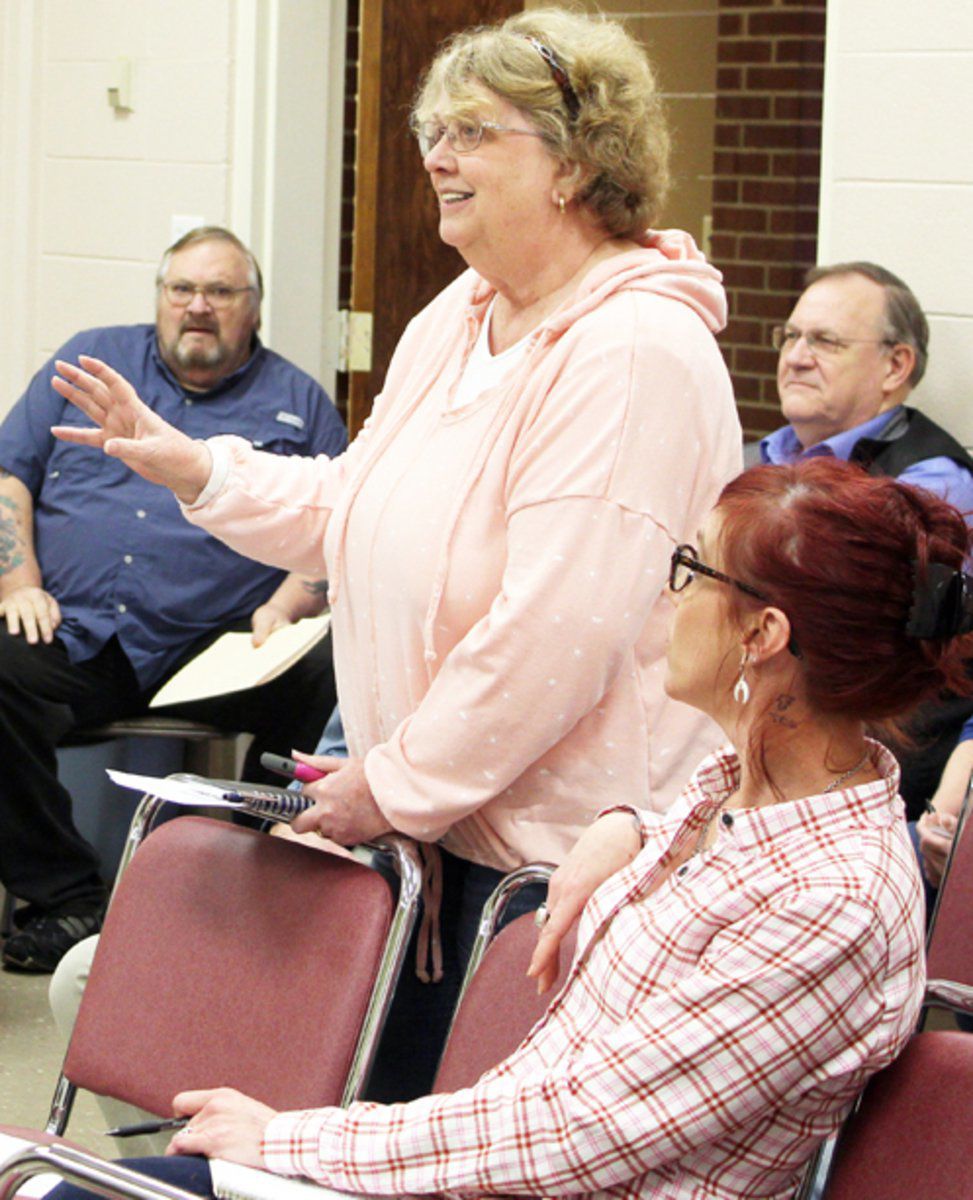 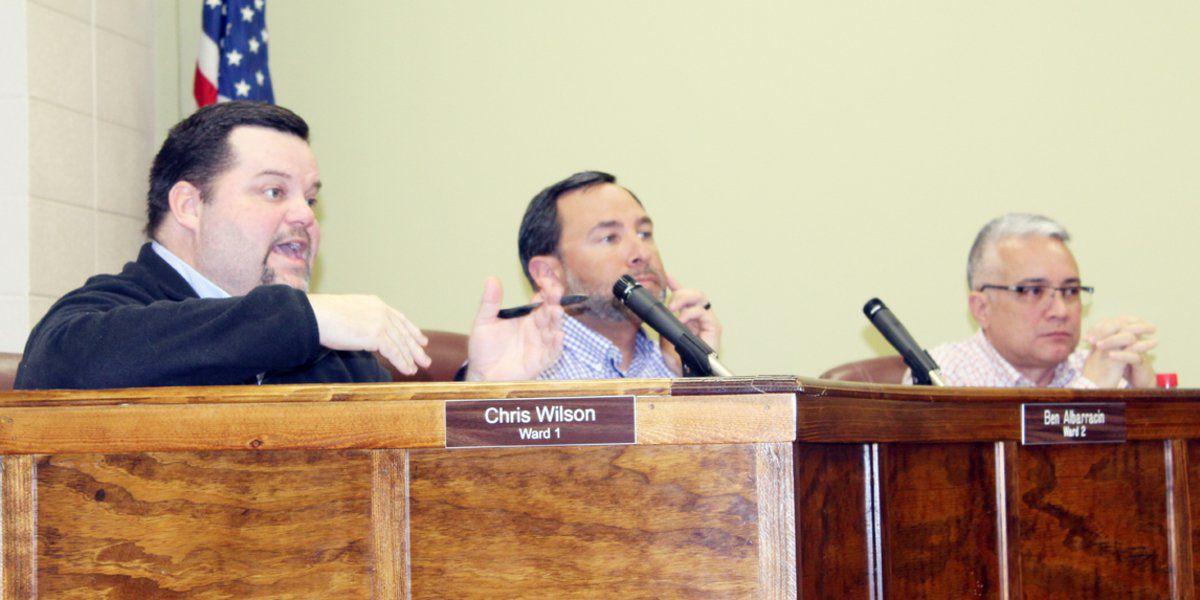 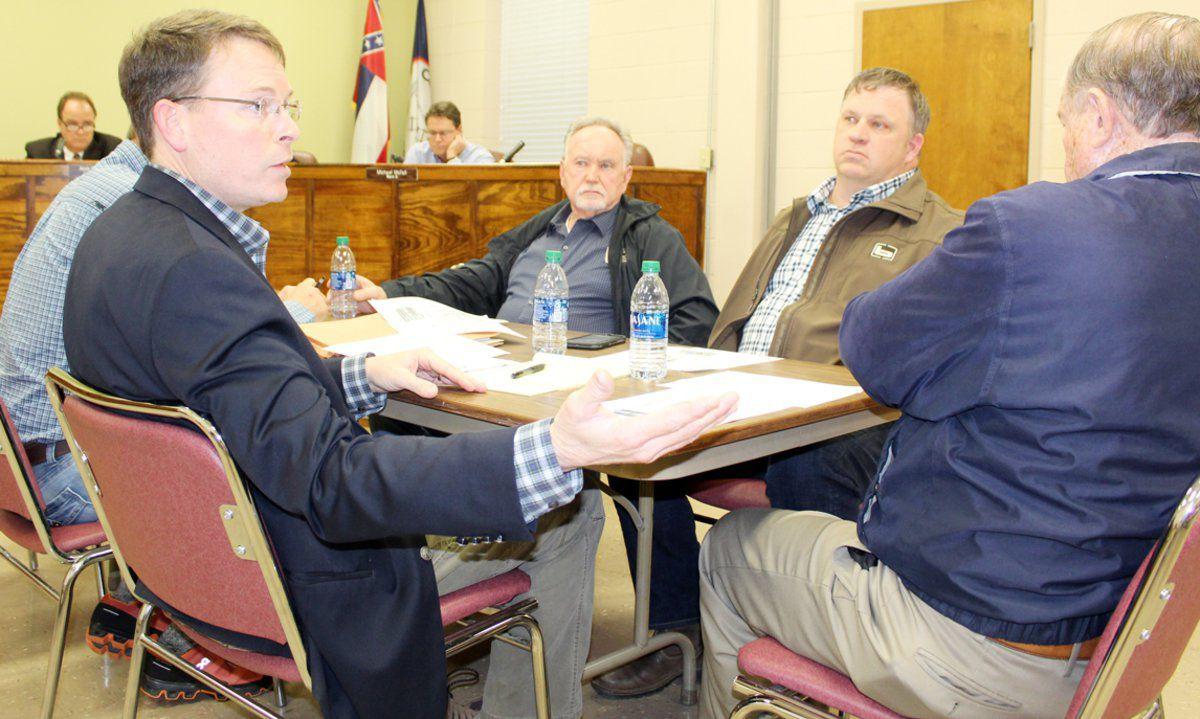 Bill Davis, board attorney for the Alcorn County Board of Supervisors, addresses a question to Shelter Director Charlotte Doehner during Tuesday's joint meeting of city aldermen and county supervisors.

Bill Davis, board attorney for the Alcorn County Board of Supervisors, addresses a question to Shelter Director Charlotte Doehner during Tuesday's joint meeting of city aldermen and county supervisors.

City aldermen and county supervisors agreed that a professional assessment of the building that will become home to the Corinth-Alcorn Animal Shelter is needed before renovations continue.

It was the only motion to come out of a joint meeting of the Corinth Board of Mayor and Aldermen and the Alcorn County Board of Supervisors Tuesday afternoon at City Hall, with five of the six aldermen and four of the five supervisors present. The meeting was intended to get some direction on the project and answer some questions as the shelter moves toward relocating to a former Mississippi Department of Corrections facility at 2407 Norman Road. The building is jointly owned by the city and county.

Members of both boards had concerns about lingering uncertainties with the plumbing, electrical and other possible structural issues.

"I don't want to get six months down the road and we've spent half our money and we realize we've wasted a big chunk of it," said Alderman Michael McFall.

The boards passed a motion to get a professional inspection to outline what needs to be done and the estimated cost. Approximately $305,000 from the Doris Baker estate is available for the building renovation.

There was also some discussion of whether a project manager should be hired to help coordinate the work.

Several issues have emerged with the property, which had sat vacant for some time. Shelter Director Charlotte Doehner said the main water valve collapsed when the water was turned on to the building.

"Evidently, when the building was shut down, they simply turned the main water off, left all the water in the lines, and there are leaks all over the building," she said. "We can't really go too much further until we resolve that issue. I've had one plumber look at it and tell me every line in the building is going to have to be replaced, and that's going to be costly."

The building is also without a functioning boiler and water heater.

Doehner said she has met with about 15 contractors to get estimates on the project, but many are telling her it will be months before they can do the work.

"It's been very difficult to find contractors that want to do this project," she said.

Doehner said the changes to the existing building will be minimal.

"It's not as complicated as everybody thinks," she said. "We're not moving walls."

Thus far, the tile floors have been removed, and some cleanup is in progress.

The main building is planned to house all of the cats, puppies and medium-sized dogs. Larger dogs will be housed in a new metal building. Doehner expects to have to raise money for the metal building, which means the shelter would need to operate both locations for some time, with the larger dogs continuing to be housed in the kennels at the Proper Street building.

Doehner said the role of a veterinarian will be focused on providing care for the shelter animals and providing the spay and neuter procedures and rabies shots for the AC Spay program.