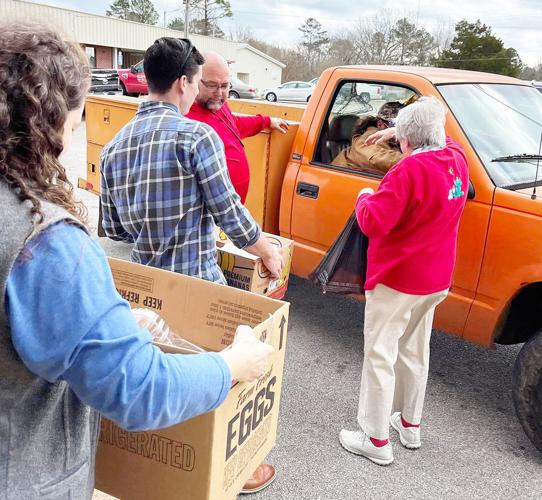 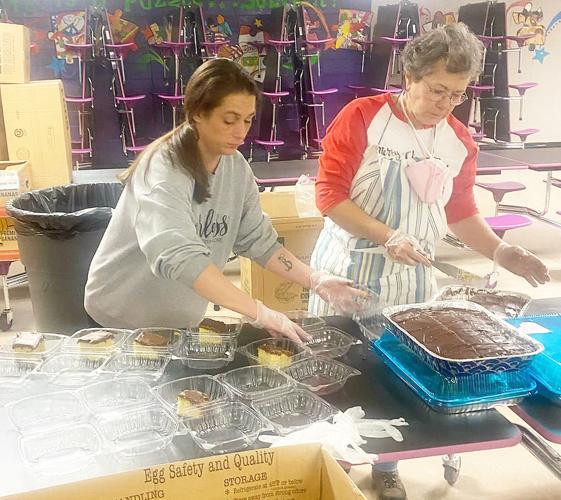 She wanted to create an event where people could get a free traditional meal on Christmas Day.

“Tommy and I and a handful of others got together a homecooked meal and opened the doors at Living Free on Christmas Day,” she said. “We had ‘It’s a Wonderful Life’ playing on repeat. We had coffee and the newspaper. We did everything possible to make it a warm and inviting place where people could come together, eat and celebrate the birth of Christ.”

Over 300 people were fed that day. “We laughed, cried, prayed and had the best day ever,” said Marea.

More than 950 plates of turkey, ham, dressing and all the fixings along with a dessert were served via a curb-side only pickup at Alcorn Central High School. Over 100 bags of fruit was also handed out. Organizers decided to continue the safer drive-through option instead of allowing an open dining room again this year due to the ongoing pandemic.

“We had many people come through asking for 10 plates and we had many who just asked for one,” said Marea. “It’s always been our goal to serve people no matter race, religion, or tax bracket – that’s never mattered and it never will.”

About 400 of the meals were also sent to the county and regional jails for inmates.

Tommy and Marea Wilson along with Sheriff Ben Caldwell, school Superintendent Brandon Quinn and ACHS Principal Jeremy Reece are the organizers of the event which costs about $5,000 to complete. Living Free foots the bill through community donations. Hundreds of volunteers come and go throughout the day to provide a helping hand. Chef Larry Betts heads the kitchen where around 1,000 meals were prepared.

“I am beyond thankful for so many – especially those who give their time on such a special day, those who send money, those who make 500 cupcakes, those who buy ham and turkey and those who came to get a plate,” added Marea. “We will be back next year ready to provide this wonderful blessing once again.”

Monetary donations are also still being accepted to help pay for the event. They can be mailed to P.O. Box 224, Corinth, Miss. 38835. An online donation option is available at livingfreecorinth.com. For more information, contact Tommy Wilson at 662-603-9829.

"I am beyond thankful for so many – especially those who give their time on such a special day, those who send money, those who make 500 cupcakes, those who buy ham and turkey and those who came to get a plate. We will be back next year ready to provide this wonderful blessing once again."

What are your summer vacation plans?